Some people might get the impression that I don't like The Dog. This is only mostly true, but she is growing on me. I do have to say that it is nice to have someone who loves me unconditionally. The children mostly only love me when they get their way, or when I buy them things, or when they break something and they don't want me to be mad. But The Dog luuuvs me. I can pretty much ignore her and she still wants to be around me all the time. Plus, I know that if a shadow, or a baby, or Hello Kitty ever tries to break into our house and hurt me, The Dog has my back.

Today, I fired the maid service and I am not happy, either that I had to fire them or that I now have to clean my own toilets this weekend. They were an hour and 45 minutes late again and so I told them not to bother because I did not have another 3 hours to wait around for them to finish. It's very disappointing because this is the maid service we hired six years ago when I went back to work full-time. The working full-time was Husband's idea, but I quickly realized that our house was never going to clean itself, especially when I wasn't home and the children were. I told Husband if we were going to survive, he needed to help around the house more. So we hired the maid service. Now they are under newer, cranky management and I don't want to have a maid service that shows up late and bullies me, so I fired them. Bummer. I know that many of you reading without maid service will think that this is not a big deal, and wonder why am I complaining when you  have three jobs, eight kids, and a sparkling clean house. But remember that my husband is in Afghanistan and this was one of the bribes he promised to make it seem like he wasn't leaving me with ALL the responsibilities and taking off for a year, which he totally is.

To make myself feel better and face the prospect of cleaning the house easier, I went shopping for cleaning products, which I bought and am very happy with and also a purse. OK, you are saying, isn't this the woman who has approximately 31 purses and just bought the perfect purse and why on earth would she need a new one? To which I will reply that it is pretty and purple and has jeweled handles and is decidedly NOT for commuting, and did I mention that my husband is in Afghanistan? And he told me yesterday that I couldn't substitute french fries for him anymore because they were unhealthy and purses are definitely not unhealthy unless they fall off the shelf and hit me on the head, so I will find a different place for this one.

Child 1 was in a big dance spectacular and she was amazing. It was a big spectacle with all the youth from our church in the area. Some of them were not dancers and you could tell (though they were still very enthusiastic,) but Child 1 was so good that people asked me if she took lessons. I said no, I could never get her to take lessons because when she was little she thought that ballet slippers looked silly and she wouldn't wear them. Child 2 piped up with "no one in our family can dance." Which I actually managed to overhear despite the noise of the music and the crowd and I was shocked. Shocked! Because I am a Cha-cha Champion. A long time ago, before I met Husband I was a dancer, but Husband does not like to dance, so we don't. OK, technically that is not true. It is not that he didn't like to dance, it was that I didn't like the way he danced, so I wouldn't go with him. I feel terrible about this. If I had it to do over again, I would dance with him. But first, I would give him lessons.

This is the photo of Child 1 dancing. Can you see her? I SO should have brought a better camera.

For the person having a worse day than me, I choose this woman: 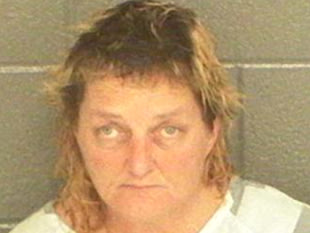 This is her second mug shot. She was arrested, didn't like the first one, so called 911 to complain, and then was arrested again for misusing the 911 system. Seriously, how much worse could the first one have been? So, lady, thank you for reminding me that as bad as things are, at least I have never been arrested and had everyone in America laugh at my mug shot.