I have writer's block. This may have something to do with the fact that I only got 2 1/2 hours of sleep last night. I mean, 2 1/2 hours isn't even enough time to recharge my phone, let alone my brain. I got so little sleep because I stayed up late helping Child 1 and Child 2 pack to go visit grandparents and then I had to get up at 4 to drive them to the airport, which is totally my fault because I picked the airport that was farthest because they had a non-stop flight early in the morning and I thought it would be easier for the children, but it was WAY harder on me. I was exhausted on the way home but kept myself awake imagining all the horror of what would happen if I had a car accident on the way home and then the children had no parents left in the U.S. (I did mention that I was an Olympic-qualified worrier.)

So now Child 3 and The Dog and I have the house to ourselves. We celebrated by eating dinner in bed while watching Disney movies.

We deserved dinner in bed after the major meltdown at church when someone had to leave early because they couldn't stop crying. OK, both of us were crying, and I started it. It's just that at church, everyone was so NICE and kept asking how I was holding up and looking all concerned so I had no choice but to start crying because they all expected it. Or rather, more likely because I am exhausted from getting no sleep and the niceness was the last straw. My good friend Jesse said upon hearing that Husband was in Afghanistan, "It must be so hard because you're a matched set."

And that is pretty true. We're two halves of the same whole and I feel lost without him. And that is a close to a love letter that I'm going to get in this blog, because mushy love stuff is not funny and the children will complain and start giving me writing advice again.

As for someone having a worse day than me, this man wins today. 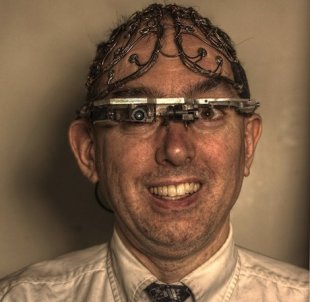 Not only was he assaulted in a McDonald's over these glasses, but he had them surgically attached to his head. So thank you, Mr. Cyborg, for reminding me of the importance of good judgment and better common sense.
Posted by Jen at 10:09 PM