Bad Day 22--Pushing the fledglings out of the nest--literally

Husband is in Afghanistan, so that means I can do anything I want to with the children. So today, I pushed them off a mountain. OK, technically, they jumped on their own, but I encouraged them, and I am very proud of myself for doing it. We went to a sort of mountain adventure park and I sent the children down a zip line, and a coaster, and an alpine slide. I was very proud of them because none of them screamed like I did when my dad took my on a log flume at age 10 and I kept trying to get out before we got to the top and he swore he would never take me on another ride again, and he kept his word.

But my children are braver than me. I spent my entire childhood being afraid of driving off a cliff, and they just jumped off one. It probably helps that their lives have been filled with lots of adventure from when they were pretty young. They've been to the DMZ in Korea, and hiking in the mountains of northern Vietnam where they patted water buffalo, and rafting down a river in China. We do lots of fun adventurous things that if I took the time to think about I would probably not not think was a very good idea, such as putting them on a raft made of PVC pipes while sitting on lawn chairs to go down a Chinese river that I'm sure has never seen a safety inspector. But it was fun and we all lived and a billion Chinese people do it all the time, so no harm, no foul, right? Child 3 is scarred for life because of the bathroom that was a board with a hole over a stream in Vietnam and to this day hates public restrooms, but still--lots of fun! And Adventure! 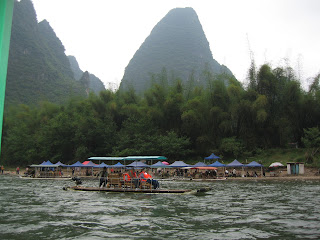 Today was not a bad day, in spite of the lingering headache, and I'm pretty certain that Wesley Snipes is having a worse day than me. He just had his 50th birthday while he was in jail for not paying his taxes. So thank you, Wesley, for reminding me that even when I am rich and famous, I will do my civic duty and pay my taxes, and I would much rather jump off a mountain than be in jail.