The children and Sister 2 are being exceedingly silly and it is a lot of fun. They have decided to make a series of movie parodies, the first one being "Like Goldilocks and the Three Bears." It's "like" Goldilocks but not really because there will be three kangaroos and it will be set in Australia and Goldilocks will eat Vegemite and play didgeridoos. They plan on filming it in the Outback Steakhouse parking lot so they can say it's set in the outback. These are the kinds of things that happen when Sister 2 is around. She needs to come around more often because giggling uncontrollably is SO much better than crying all the time.

But good news! Due to scheduling problems and work coverage issues, Husband is coming home for his first R&R trip in two weeks! We are very excited and it is a huge relief to know he will be home for a little bit. I really had no idea how hard it would be to be without him, but I feel like only 1/2 a person. Also, I am no good at killing bugs and now there is no one in the house who can do it. Not long ago, Child 1 found a cockroach in the bathroom and asked me what to do about it. I said she should shut the door and pretend it wasn't there. She made a biohazard sign that said "do not enter" and put about 20 roach traps all over the bathroom. Then she had to sleep with me because she was worried it would crawl into her room. I told her not to worry about her room, because no cockroach could live in that mess, and she gave me a dirty look.

Child 1 is the queen of dirty looks, so much so, that sometimes I say things just to make her make that face because it is hilarious. It makes me laugh at all the wrong times. I know that I should be serious and stern at times, but when I see The Look on any of my children, it just makes me crack up. Once, when Child 1 was very small, she gave me The Look when I sent her to time out and I laughed. That just made her angrier, so she opened her door and shouted, "And your clothes are UGLY!" And then I lost it. I actually fell on the floor laughing.

But tonight, as I said good-bye to her because she is spending a week with her cousins, she gave me a different kind of look altogether which made me just melt. I think, really, that she might actually miss me a little bit. Child 2 won't even notice that I'm not around unless she wants food. But Child 1 just might notice that she needs me a little bit and wants me around. That makes me very happy.

Today, Kim Collins of St. Kitts and Nevis is having a really bad day. 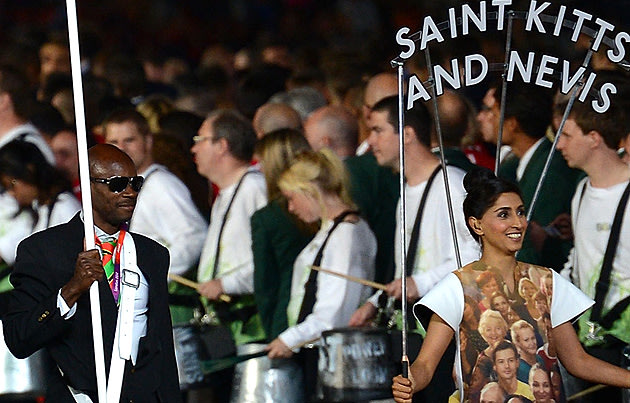 He was kicked out of the Olympics by officials because he went missing and his team didn't know where he was. Turns out, he was with his wife in a hotel. Boo to the officials that thought the Olympics were more important than a marriage. If I ever have to choose between job and Husband, the job will definitely lose out.
Posted by Jen at 12:13 AM