OK. So I'm not exactly 35. But that's how old people think I am when they guess, so I'm going with that. I used to only admit to 29, but now that Child 1 is a junior in high school, she thinks that's a little too young, so I'm going with 35. Listen, youth is fleeting and beauty is only skin deep, but a good moisturizer will allow you to live a lie for a long, long time. Plus, in my head I stopped aging at 35, so it's all OK.

It used to bother me greatly that people thought I was younger than I am. When I was 18 and I was handed a kids' menu at a restaurant, I would seethe with indignation. So I started wearing lots of make-up and very high heels, which I just can't be bothered to do anymore now that no one would ever think I'm a child. My mother always said I would be happy when I was older, but I never believed her because who believes their mother ever? Certainly not my children. Like when I tell Child 1 that she is movie beautiful she doesn't believe me even though her whole life people have asked me to let her model and I did when she was little but I would never let her now because modeling is icky. Child 2 believes everything I say, but she tunes me out with headphones most of the time so I'm not sure that counts. And Child 3 is still in the phase where she thinks she can conquer the world and I so don't ever want her to grow out of it and I keep telling her to stop growing and she doesn't listen to me!

As much as I hate to admit it, my mother was right and I love it when I tell people to guess my age and they are completely wrong, but in a good way. When Child 1 was small, she used to ask how old I was and I would tell her to guess and she would say "16!" And I would say "you're right!" And she would run away very proud of herself and I would smile loving the fact that she thought 16 was old, and boy what did she know about old! So for years she totally had no idea how old I was. Then years later, when she could count, she figured it out and told Child 2 who said "No she's not! She's 29 cuz she told me!" See? I told you Child 2 believes everything I say! Bless that Child 2.

Today, I found out that Husband is definitely coming home next week for his first R&R. I know. You are thinking that it is a little soon. And you may be right, but I don't care what you think. You know when is not too soon to come home? 28 days ago, that's when! And the reason I know he is definitely coming home is because I made his flight reservations. See, he couldn't get his travel office in Kabul to pay any attention to his reservations and they kept telling him it would be difficult to find a flight and then they kept not finding any. So I said, I'll fix that. And I marched right down to the travel office and they found a flight in like 5 minutes so I had them reserve it for him and now he is coming home to me. And I can't wait. I'm like a kid the week before Christmas or a Senior the week before graduation. I can't think about anything else and I can't get any work done. So tomorrow I'll have to buckle down and do some. OK, that's not technically true. I actually accomplished a lot at work today, but I did occasionally daydream and it made me happy.

So today, the UK immigration officers who gave visas to the Cameroonian Olympians are having a worse day than me. 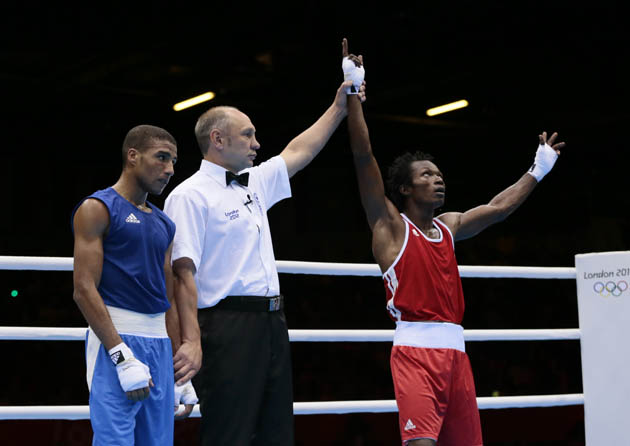 I can testify that there is nothing a visa officer dislikes more than to learn that someone they gave a temporary visa to has lied to them and claimed asylum or is just working illegally. I could tell you stories from my time in China that would make you comb the streets of Texas looking for illegal Chinese aliens that I issued visas to in good faith. Or, at least that is what it made my Dad do. Except that I actually asked him to do that and he sent me lots of good evidence and I revoked that visa! So to the UK visa officers in Cameroon, I am very sorry for your bad day and I am SO glad it was not me that issued those Olympic visa jumpers.
Posted by Jen at 8:20 PM