I can't believe it's been about a month since Husband left. Well, actually I can. It feels much more like months and months, so what I mean is that I can't believe I've survived a whole month. I did not cry today. I really, really wanted to, but I had to hold it together to give a presentation and attend a bunch of meetings. So I white knuckled it and managed to get through everything by telling myself that I could fall apart later. And then later came, and I was OK, which totally shocked me.

It helps that Husband is coming home next week and that he arrives on our anniversary. I won't say which number it is, but it's a big one and I have been working hard to figure out what to get him. For the very first time ever, I have present anxiety. He, perhaps having been embarrassed by all the mentions of jewelry on my blog and facebook page, has actually already bought me something which arrived today and which I very righteously did not open. That is a big deal for me because once I opened my Christmas presents on December 23rd because I couldn't wait any longer and I always read the end of the book first to see if I'm going to like it. So not opening the present which is just sitting here on Husband's dresser taunting me is a big big deal, and since I told him I wouldn't, I won't open it until he comes home. On our anniversary. Which would be present enough. (So maybe I could just take a peek? But no, that would be wrong.)

But anyway, I have been planning his present for months, but it has been much more difficult to put together than I imagined so we'll see if it's all done in time and I'm afraid he'll be disappointed and he'll think I just did it at the last minute, which I didn't. So we'll see.

This woman in China had a way, way worse day than me. Check out this picture of what was living in her ear. But I warn you, it will give you the willies! 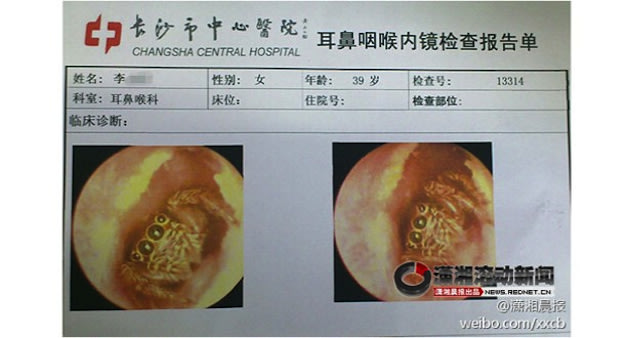 Yes, that's right. She had a spider. In her ear. Living there. For five days! I'm shivering just thinking about it and am very, very grateful that Husband has snored most of our married life so that I now always sleep with earplugs because I never, ever, ever, ever want a spider in my ear! Excuse me while I go flush mine out with saline.
Posted by Jen at 11:01 PM