I know something. I know it and I can't share it with anyone and the fact that I know it is making me very cranky. I want to unknow it but that's not possible. You can't unknow anything. You can forget it. I do forget things all the time, like the name of that boy in high school who was in love with me and I had to keep letting him down gently over and over again. Or the name of the store where I bought those cute blue shoes that one time. Or my password to anything. But this is the type of thing I won't forget and I will just be cranky about it until I can think about something else. Quick, someone give me something to distract me!

The children are downstairs ruining my kitchen with spray glue. OK, I may have done some of the ruining. I'm not very good with spray glue yet. It is a relatively new skill. When I worked in a craft store years ago, there was no such thing. We only had hot glue and I still have the scars from those stupid glue guns. They are deadly! We are using the spray glue to make a monkey costume. The children are helping out at a 4 year old's birthday party tomorrow and one of them is a monkey and one of them is a troll. It is a Dora party, for those of you familiar with Dora the Explorer. I'm sure it will be a lot of fun, but I am SO glad there is such a thing as spray glue because it means I don't have to sew anything. I really, really hate sewing.

I thought that all good moms sewed. My sisters do. My Mom did. So I tried. When the children were little, I really tried. I made them Easter dresses once and I was literally up all night. I didn't get to bed because I was still sewing right up until it was time to leave for church. And I didn't even do that good of a job. Then I made Halloween costumes. Because don't all good mothers make their own costumes? I hated it. Every stitch made me angry. And then, we moved overseas and finding fabric and patterns was really tough and I decided, this year, just this year we'll buy the costumes, and you know what? The kids loved them and I was still a good mom. So now we mostly buy them. But since we have some spray glue, I'm envisioning all sorts of fun. This could be a good distraction.

These French tourists in Sri Lanka had a worse day than me. All they were trying to do was take a fun picture, and the mistake they made was not using a digital camera because the photo developer turned them in and they received a sentence of six months of hard labor (thankfully suspended,) all for doing something very French--kissing a Buddha statue. So thank you, mon amis, for reminding to be grateful that I have never kissed any statues in Buddhist countries. 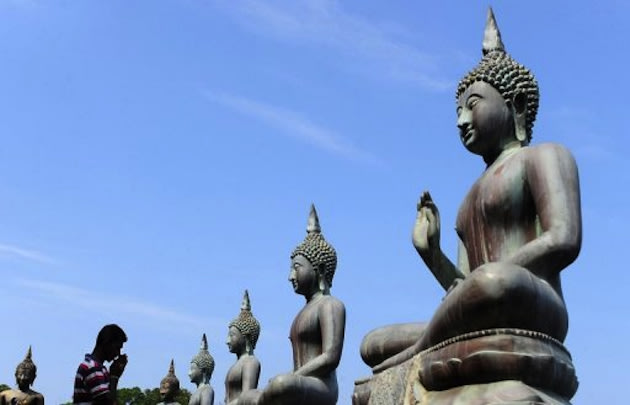