Today was definitely a purple day which even included crying at my desk and then hiding it badly from my office. I told them all I was really tired. The sad thing is, otherwise it was a pretty good day. I finished most of my paper, and then life came full circle. See, I was an intern in DC years ago for a non-profit for whom I organized a big conference in return for which they paid me a pittance and let me hang around when they invited important people to come talk to them. And now, today, I became one of those important people that they invited to come talk. It was really, really cool and I wanted to jump up and down and I was still purple. What is wrong with me?

OK, small translation for people who don't remember or haven't followed this blog that closely. Purple comes from a Dr. Seuss book and is a euphemism for depression which I think is highly appropriate and very descriptive of how I feel, regardless of the fact that purple obviously is one of my favorite colors because I have three purple purses, one of which I bought last week. And the most infuriating thing is that I haven't had a purple day in a long time and now today it just hit me like a blast of cold air.

OK, maybe that was actually a blast of cold air because maintenance came to fix my vent and told me it was blowing out air that was 64 degrees which would be nice in the summer when it is 100 degrees outside, but when it is freezing, then blowing cold air into a cold office only makes it unbearably cold. Oh, and they said there was nothing they could do because when they divided up the office space, they smartly put the control box to my vent three. offices. away. So it will be a while before they figure out how to fix it, and by a while they mean never. Thankfully, I learned from my friend "Sparrow" that snuggies come in an Elvis pattern. This congressional staffer is having a worse day than me. See, he was watching the Superbowl and this commercial came on. 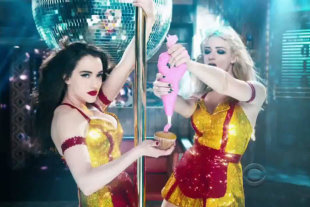 And then he tweeted "me likey broke girls" which is a reference to the show in the commercial, and is a pretty dumb tweet. But what made it even dumber, is that he did it using his congressman's account. So of course the media picked it up and mocked the congressman, but it wasn't the congressman who tweeted. So thank you, Mr. Former Congressional Staffer, for reminding me to keep only tweeting poetry although I really don't tweet much at all, and that when I do, I shouldn't use a work account. Seriously, use some judgment! And those girls are way, way out of your league.