It is 6:45 and I am already in bed. I am sick to my stomach and I'm coming down with a cold and I have lost my voice. The voice thing has nothing to do with the cold and everything to do with the fact that I think I talked more in the past few days than I have since Husband left. Sister 1 and I had a lot of catching up to do. She is now on the plane home and we are all sad about it.

I have to complain a little bit about all the people who post spoilers on their facebook page that ruin my favorite show. Here I was in complete ignorance about what happened in the finale and then everyone started blabbing, including Yahoo and Slate. Ugh! So tonight's finale wasn't a surprised and I am mad, mad, mad.  But it's still a good show and I will still keep watching. And I will even watch the whole season again when Husband comes home and I will not tell him a single thing about it. Because I love him and because I don't want to ruin it for him. Someone should be surprised.

Now, about Lady Mary's hat. Where can I get one just like it to match my navy coat? I look particularly nice in hats and that is a good one and not the kind that everyone would go, oh you were watching Titanic which also had great hats but they are rather dated. See? 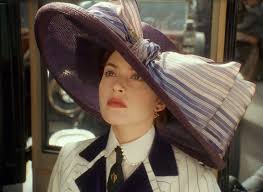 If I wore that, people on the metro would be very annoyed with me because I would keep hitting them with my hat. Backpacks are bad enough. I really get peeved when someone gets on the metro wearing a backpack that makes them three times as wide as normal and then doesn't take it off and swings around and knocks me in the nose with it. I am just short enough that I live in fear of the tall hipster with the overloaded backpack. It is only the fact that the metro is usually so crowded that no one can move that has kept me from being knocked on my backside. I'm trying to think of a snappy comeback the next time it happens, which is pretty much every day I don't get a seat. Anyone have suggestions?

This man in Florida is having a worse day than me because he posted this picture on facebook of him breaking the law.

Yep, just like that woman a few months ago, he thought it would be fun to play with a manatee, but what he should have remembered is that they are an endangered species so it is a really bad idea to play with one when you find it. Someone found the photos and turned him in and now he's been arrested. So thank you, Mr. Manatee Harasser, for reminding me to be grateful that my children are smart enough to know to leave Manatees alone. The Dog isn't, however, so she won't be going on any trips to Florida anytime soon.
Posted by Jen at 9:01 PM