It's not really 99 days because we have to include travel time and I actually started counting the day before Husband left and it takes 2 days to get there and he has to be in Afghanistan for a year, not including R&Rs, so really it's somewhere around 103 days, but who's counting? Oh, right. I am counting and it needs to go faster! Somebody teach me how to speed up time like Hiro in "Heroes". That was a great show the first season. Then it got weird.

I am supposed to be working on my EER, but obviously I am not because I am blogging and watching Magnum P.I. instead. I know, I'm setting a terrible example for my children. But actually, it is mostly written, it just needs editing and I am too tired to edit it at the moment. And it is not due tomorrow like every project the children have ever worked on except the ones I find out about and make them start early. Also, I have a cold and I'm sick to my stomach. Apparently, white chocolate is now off limits, too. Honestly, what is the point of dessert if I can't eat chocolate? I miss brownies. Child 2 had one with her dinner on the flight home and I asked her if I could smell it. She said fine and it wasn't very good anyway, but I would almost kill for even a bad brownie--that is, if it didn't kill me first.

Speaking of brownies, tonight for dinner we went to Red Robin because they have gluten-free hamburger buns. I know, you don't get that segue, but keep reading.

Child 3 almost ordered a mint brownie milkshake. I stopped her just in time. When the waitress found out that we were allergic, she had the kitchen make a special mint chocolate shake without the brownies. It wasn't on the menu, so they made it special for Child 3. Apparently, the manager has celiac disease, so he is particularly sympathetic to gluten allergies, but  it was the waitress' idea, so I gave her a nice, big tip. Really, I don't think they could do much more to make us any more loyal. They had me at "we have an allergy menu." It was actually Child 1's idea to have dinner there because she wanted to buy shoes at the shoe store next door. I did not buy any because all I could find were gray heels and I already have 2 pairs, so (Husband, sit down and get ready for a shock) I don't need any. That's right. I don't need any shoes. Or purses. But then, today wasn't that bad of a day so I really didn't need to go shoe shopping. When you can't eat chocolate, shoes are a decent substitute. I know that doesn't explain how I bought so many before I was allergic to chocolate, but it works well as an excuse now!

Our trip to England has made me wonder just how we are going to handle things wherever we live next.  If it's hard to find food to eat in first world countries, I imagine it is going to be even harder in Uganda, or Indonesia, or the Bahamas. I know. We're not going to the Bahamas, but hey, a girl can dream, can't she? Think of all the flip-flops I could buy!

Speaking of food issues, this little boy in NY is having a worse day than me. Adorable, isn't he? 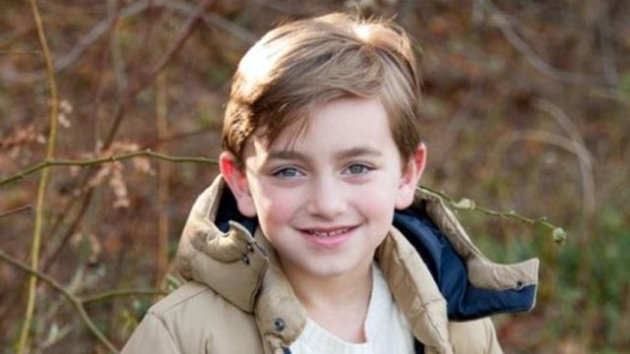 But he has severe food allergies and the protein in most foods makes him so sick that he vomits and goes into shock. He can eat about six things, but anything off the list (which oddly includes peanut butter and milk) sends him to the hospital. So thank you, cute little boy, for reminding me to be grateful that I can still eat caramels, and potato chips, and fritos and that I came to these allergies much later in life. But then, not ever having eaten a brownie, maybe you don't miss them as much as I do.
Posted by Jen at 9:26 PM