Bad Day 292--I should have been more specific

I never ever thought I would complain about having a child who is extremely trusting and obedient, but we discovered today while cooking that maybe sometimes you should question authority. See, we were trying out recipes from the gluten-free dessert cookbook that the children gave me for my birthday. We actually had all the ingredients for some berry bars with lemon icing, or I thought we had all the ingredients which is not exactly the same thing as having the ingredients. This is what the bars were supposed to look like, but ours did not look like this. 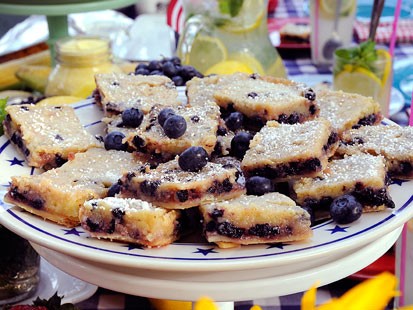 We made the bars and put them in the oven, and then when it was time to make the icing, there was no powdered sugar. No problem because I happen to know that you can powder your own sugar from regular sugar with a blender. The children also know this because apparently, when Husband was home at Christmas, we did not have any powdered sugar then either and he tried to make some in the blender but he forgot to put on the lid and he sort of exploded the sugar everywhere. Or so the children tell me because I was not witness to this event and wasn't told about it until long afterward. Husband must have cleaned up the evidence.

Anyway, I told Child 2 she could make the sugar in the blender, so she and Child 3 went into the kitchen and I heard lots of blender noises and some giggling and then I told them to follow the directions to make the icing which involved adding orange juice to the sugar and whipping it into icing. Child 2 yelled from the kitchen that it was lumpy and what should she do, so I said she should use the beater. She said really? I said yes, go use the Kitchenaid mixer because that will make the icing fluffy. So she left and said it wasn't working. I said bring the icing here so I can see it, so she did. And I looked in the bowl and there was about a tablespoon of lumpy stuff at the bottom. I said, where's the rest of it? Child 2 said that was all of it. I was really, really confused because I had told her to put 1 1/2 cups of sugar in the blender and I had visions of powdered sugar all over the kitchen. So I asked her what happened to the other cup and a half? And she said there was some stuck to the bottom of the original bowl, but that was most of it.

This wasn't making any sense to me. Mother-in-law said I looked confused. So I went into the kitchen and she showed me the tiny bowl they had used before which had nothing in it. So where did the sugar disappear to? Well, apparently Child 2 had blended Splenda instead of sugar and what happens when you put a cup and a half of Splenda in a blender is it disappears and you end up with about a teaspoon of very fine dust. So we started over. The bars were awful, by the way, so we won't be making them again, but we did decide the dough would make a nice shortcrust base for apple pie filling and caramel and a brown sugar crumble on top. So that's what we'll try next time. Maybe that will disguise the rice flavor of the rice flour because the lemon frosting did not do it.

This elk in Colorado is having a worse day than me.

No one is quite sure how she got the tire around her neck, but wildlife control can't sedate her to take it off because they think she might be pregnant. Hopefully, although the tire may be a tad uncomfortable, she just thinks it's a lovely accessory and enjoys her necklace. She can apparently still eat and jump fences, so maybe she'll be alright and it won't cause her any harm. But thank you, Ms. Fashion Elk, for reminding me that good accessories make you stand out in a crowd, even if you are an elk, but they really ought to be more comfortable to wear than a tire.
Posted by Jen at 10:29 PM