So I woke up this morning at 2:30 am with a headache and fever and stuffy nose and sore throat, which isn't surprising given the amount of stress I've been under and the fact that I can count the hours I sleep each night on about 3 fingers. So I tossed and turned until about 5:30 am and then called in sick. Then Husband called at 6:30 because I had e-mailed him that I wasn't going in so he should call me at home. It was nice to hear his voice in spite of the headache. Then I woke up at 7 and thought, I should call in sick and I dialed the number but thank goodness remembered before I pushed the talk button. In the olden days, when we had actual rotary dials, it was much harder to stop a call, but then since the dialing took so long, I might have remembered before I finished. Then I tried to go back to sleep but of course I couldn't.

So I have spent most of the day in bed reading and sweating because it is HOT outside. We have gone from winter to summer in one day. I hate this new weather that can't make up its mind. And then I took a couple of children to doctors' appointments and it was the most beautiful day and so like me to be sick and miss it. But supposedly the weather will be nice all week so maybe I can go for a walk at lunch tomorrow if I am well enough to go in. This darn fever, and the headache won't go away.

Other than that, I am doing a little better. There was a Brother sighting on his birthday, so family tells me he is alive and well and not in a ditch. And I am taking Sister 1's advice and thinking a lot of the beach which is our happy place. So when I start feeling the stress, I am focusing on this. It's the beach in Guam and you can totally see why Child 3 thinks we should live there and open a gluten-free restaurant. It really, honestly does look like that.

So I close my eyes and I imagine my feet digging into the warm, powdery sand and I can hear the waves gently lapping on the shore and feel the breeze and smell the frangipani and I so need a tropical beach vacation. Or posting. Husband's next job will have to do with the South Pacific islands, so maybe. . . . A girl can dream, can't she? And seriously, meditating about the beach does help. Next spring break I'm going somewhere warm with a beach and a hammock where I can nap all week.

Poodle lovers in Argentina are having a worse day than me. Apparently, some people bought what they thought were poodles in a bazaar for about $150 apiece. Here is a picture of both a poodle and the animal they actually purchased. 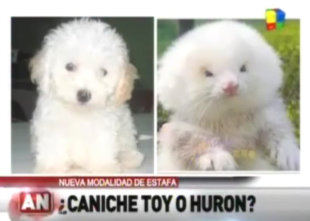 Now, if you know what a dog really looks like, you would not be fooled into thinking the animal on the right was a poodle. I am not a dog expert, but even I know that beady little eyes and a pink nose does not equal a dog. So you are right in thinking that they were duped. What they bought instead of a poodle was a ferret. Yep. A. Rodent. For $150. Honestly, had these people ever seen an actual poodle? So thank you Clueless Pet Owners, for reminding me to be grateful that The Dog is not a ferret. I would actually like a ferret even less than The Dog who just a second ago tried to steal my dinner. Thank goodness it was only Chinese food and not the yummy skillet lasagna from the recipe that "Stevie" gave me that I made yesterday. That was awesome and I am so not sharing the leftovers with The Dog. She would just vomit them all over my shoes.