You may not know this, but there is no special leave given to people whose husbands narrowly miss getting blown up by the Taliban. I did know, though, so I went to work like normal and spent the day staring at my computer trying to remember what it was that I was supposed to be doing and telling myself to breathe. A navy pilot once told me about a mishap he had coming off a carrier once. The catapult launch malfunctioned and he almost crashed and had to do some tricky flying to avoid hitting the water. After he landed, he called his wife to tell her about it. She asked if he was OK, and he said yes. Then she said they didn't need to worry about it. He was mad that she wasn't more sympathetic but then he realized he had married the right woman because there would be more danger and more near misses and he didn't need her to be hysterical.

I always thought I wanted to be that kind of wife, but I am so not. But see, I didn't marry a navy pilot. I married an English teacher who later became a diplomat--a sweet, mild boy who grew up in a town filled with hunters but doesn't hunt and made me fall in love with him by looking silly. I didn't sign up for this. I was dragged into it kicking and screaming--OK, more like sobbing and yelling, but still, it does not come naturally to me. It's not a role that sits comfortably on my shoulders. I was a pretty good English teacher's wife and I was an awesome diplomat's wife. (I'm not bragging--it's true! I throw a great party and I am an expert at small talk.) But I'm not used to this role, yet, and I don't want to be. It's like when you try on a wool sweater and it turns out to be really itchy and it's tight around your neck and you tug at it like it's choking you and you are gagging and want to shout get it off of me already! I'm not going to buy it! So that's how I feel about it, but it's too hard to explain that to people who ask how I am so I just say I'm fine. I feel like I should be fine, but I'm not. But then when I was telling my friend "Carole" about what happened to Husband she kept saying "holy crap!" only she didn't say "crap" and Carole lived in Nepal during the revolution and gave birth to twins so she knows what is scary and if she is rendered speechless, then maybe it really was as bad as I think it is and it is OK if sometimes I stare into space and then burst into tears.

The people who discovered this tarantula in Sri Lanka are having a worse day than me. 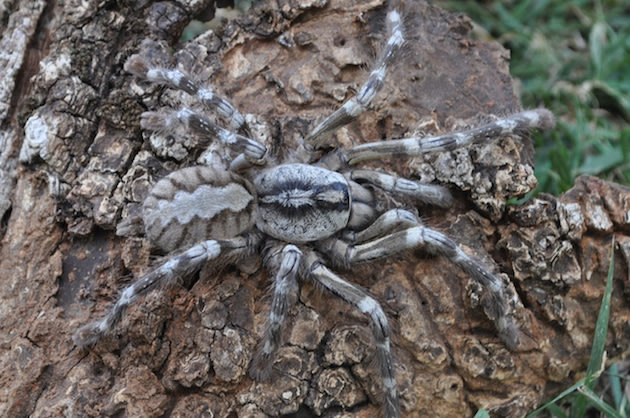 It is the size of a human face which is pretty darn big and before yesterday, would have scared me to death. But today, I feel like if I ran into that spider I would just yell get out of my way stupid spider, or I will send you to Afghanistan and let the Taliban blow you up! I've already been scared out of my wits this week, so what could a big spider do that the Taliban hasn't already?