Husband has made a few gaffes in our history together that were so bad, they are now legendary. The two worst were actually before we were married. Once, when we were going to a play, we stopped at Taco Bell first and ordered through the drive-thru. He forgot I was in the car and ordered something for himself without giving me a chance to say anything, then paid for it, then ate it and asked me why I wasn't eating and where was my food.

The second time was sort of my fault because I was stupid enough to ask him what the most romantic kiss of his life was after we got engaged. I thought he would say our first kiss, or the one after he told me he loved me, or when he asked me to marry him. But no. He went on for 30 minutes about some kiss with some other girl and how awesome it was and it was just like a movie. I am still angry about that one and the thing Husband learned quickly--and that all husbands all over the world should keep in mind--is that when your wife asks you a question and the answer is not about her, then lie. Quickly. Yes, I am telling you, for the good of your marriage--make it up. She will never know that's not the truth if you play your cards right and you can avoid decades of pain and suffering.

See, I thought that Husband had learned this lesson, but today he forgot every rule of marriage and said the words that were guaranteed to make me seethe. Flames. Flames, on the side of my face, breathing-breathl- heaving breaths. Heaving breaths... Heathing... (Bonus points if you know that movie.) 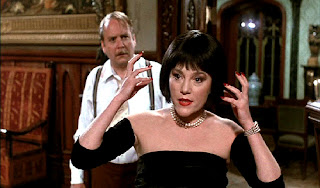 What happened was he was telling me about some conversation he had with some person I don't know and don't care about in Afghanistan about what they learned while they were there. And I stupidly asked what his greatest take-away was. So I know, it's my fault for setting him up, but he walked right into the trap without thinking and then he made it so much worse. He said, get this, that his biggest takeaways were all about working in an extremely poor country with no infrastructure. Not about how he missed his family, or what a bad idea it was to leave us, or how much he loved and needed me. No, it was all about foreign aid programs. So, trying to help him dig himself out of the hole, I said I thought you would say it was about how much you missed me. And then he said the mother of all bad lines--Oh, that goes without saying.

OK. No. It. Doesn't! Nothing about loving your wife and missing her goes without saying. Because if you never say it, it doesn't count. You know that scene in Ghost where Patrick Swayze can't say "I love you" out loud so he only says "ditto?" That scene was written by a man because all women know that "ditto" is not the same as I love you. It does not count if the words do not come out of your mouth. So here we are, Husband. Good luck climbing out of this hole because now I'm all angry again about dumb Kimberly and your stupid sunset kiss and that was over twenty years ago. Jewelry. Big jewelry. Expensive jewelry. Maybe even in a Tiffany blue box. Also the printer I asked you to order back on tax day and a computer for Child 1's birthday which is in two weeks. But first the jewelry.

Speaking of jewelry, this woman in Florida is having a worse day than me. She went to a fund raising event where there were glasses of champagne with fake diamonds in them, but one of the glasses held the real thing--a 1 carat stone worth $5,000 and someone actually swallowed it.

Accidentally of course, but then she had to confess when no one else had the real thing and then she had to get it removed through a colonoscopy. Ick. They steam cleaned it for her, but still. So, Husband,  if you get me diamond earrings as an apology for thinking that I should be able to read your mind, I promise not to swallow them. I won't even throw them at you. This time.