We drove by a comic book store today and saw some Storm Troopers and a couple of Jedi Knights. I wondered aloud what was going on, and Child 1 said, Mom, it's May the 4th! So May the Fourth Be With You. Happy Star Wars Day and I couldn't be prouder that Child 1 knew what the deal was.

This is our Iron Man weekend. We watched 1 last night, and then 3 this afternoon and now we're watching 2 which I have seen before and completely do not remember in any way. I have no idea what it's about other than Tony Stark and Gwyneth Paltrow as a redhead. I could probably do that hairdo. We went to a new movie theater in a new shopping district that has the coolest Target store ever. It has an escalator for the carts. And it's close to the Korean grocery store that sells Ambasa, so we will be going there again. For those of you who don't know what Ambasa is, I'm not going to tell you because it's hard enough to find in America and if you know how delicious it is, then you will want some too and I can't stand it when we go to the store and it's sold out.

After the movie, which was great, we ran into my friend Jen and her son who were out shopping in the beautiful weather. Jen had told me how great the new shopping center was, and she was so right and I should have gone there a long time ago. I think we'll be regulars if only for the gelato which was the most delicious I have ever had in the US. There is also a butcher and a fishmonger and an organic grocery store and a Nieman Marcus outlet! I grew up near the original Nieman's and the only thing I have ever bought there was a hair clip that I had for years. Now that I have an outlet down the street, I might go a lot, mostly so I can figure out when the sales are. The had the most beautiful shoes! And no, Husband, I didn't buy any. Yet.

This man in Florida is having a worse day than me. 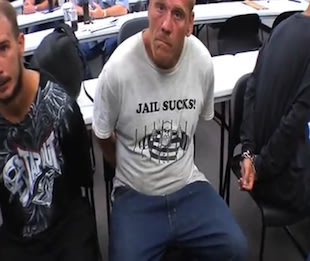 No, this is not another episode of What Not to Wear, but it seems like a good idea not to wear T-shirts that advertise you have been in prison. This guy was actually wearing that incredible piece of fashion when he was arrested for selling welfare cards to undercoveer officers. I think the shirt might have tipped them off. One good note, though, is that the police department used the recovered cards to buy baby formula for a local food bank. So thank you, Mr. Jailbird, for being the instrument of help to people who actually need it, even though you didn't mean to. And thanks for reminding me to be grateful that I got rid of all my too baggy pants. Yours look terrible and you need a belt, but I guess the officers took that from you when you went back to jail. So good luck keeping your pants up. Maybe that's why they make you wear those lovely orange jump suits.
Posted by Jen at 10:04 PM