I am typing outside. It is chilly, but my feet are toasty because they are resting on the edge of our new fire pit. Child 1 has been bugging me for months and months to get one, so we finally broke down and did, and I have to say that she was right--like she is about many things, but especially about how fun a fire pit can be. But the fire has burned down low and everyone has gone inside but me and it is a little smokey and a little cold and lonely, but I love the smell of a good fire and my feet at least are warm. This is what a fire pit looks like, in case you didn't know.

Ours has pretty terracotta floral tiles around the outside. We got it at Home Depot where we also got a bunch of flowers which was our second trip to the nursery today and Husband's fourth this week. He is making our backyard into an oasis and it will be lovely once it is finished, and I imagine we will spend lots of time out here, especially with the fire pit. That is until it gets unbearably hot in about a month.

We also took him to see Star Trek this afternoon, which we all loved until Child 2 got motion sick from the 3D. Poor Child 2, she had a rough day and she is the only one of us who gets motion sick so we tend to forget how things affect her. But she's doing better now. No, it's not the stomach flu because she was completely fine after the movie was over and she ate some mint ice cream. And this evening she ate several burned marshmallows and she is still fine.

Husband made me come inside because he said I would smell like smoke. But since when is smelling like a campfire a bad thing? It's not as stinky as cigarettes and the scent holds pleasant memories of laughing and giggling and telling stories--all of which happened again tonight around the fire pit. What is it about a campfire that brings people together? I'm not sure, but I think it might be magic because today was almost perfect, almost normal with very little hint of Afghanistan. It was loverly.

The people driving in this car in Missouri are definitely having a worse day than me. 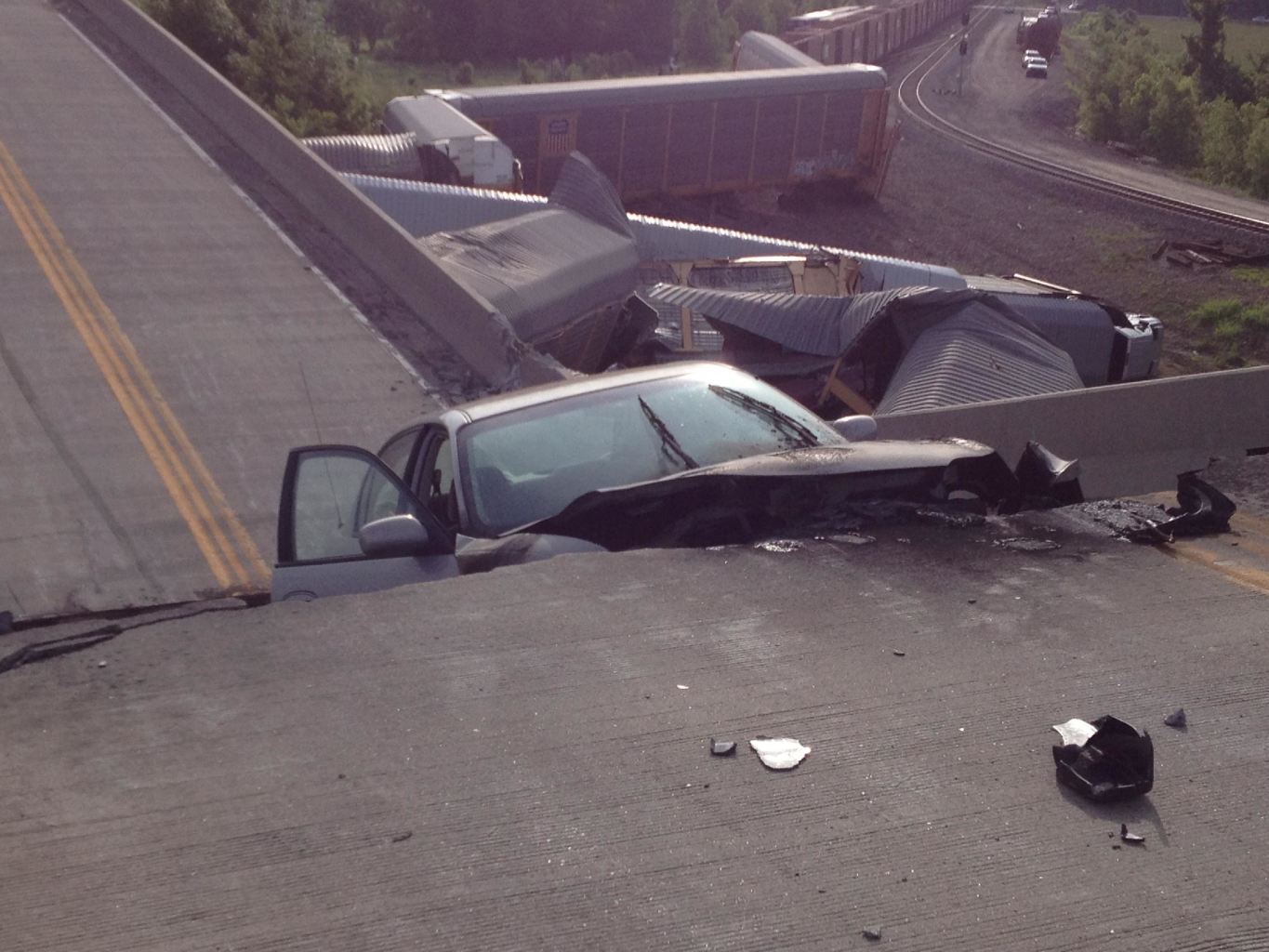 They were driving along, minding their own business, when the train passing underneath the bridge hit another freight train which caused the cars to derail and run into the bridge supports so the bridge collapsed and crushed the car. Seriously awful chain of events, but the miracle is seven people (from the two cars on the bridge and both train engineers) were taken to the hospital and all have now been released, so no one was seriously injured. Scared witless, but thankfully no fatalities. So thank you, Crash Survivors, for reminding me to be grateful that I wasn't in that car. I used to think it was fun when I was little to drive over a bridge while a train was passing under, but not any more. And seriously, how do you explain to your insurance company that your car was crushed by a bridge that collapsed from a train wreck? I hope I never have to find out.