Husband's PRT has closed. He has left. The Embassy decided it was no longer safe, so they shut the doors and pulled the civilians out. You would think that this might mean Husband would be coming home early, but then you would not be thinking like the Department. Because, instead of sending him home (and thereby making me happy AND saving money), they have decided he should move somewhere else. So he has moved to a safer place where he has nothing much to do. He only has 55 days left, give or take, but they are determined to make him stay until the very bitter end of his tour. So the fact that they wouldn't have to pay him any more danger or hardship pay if they sent him home does not outweigh the fact that he volunteered for 365 days, so that is how long he has to stay. I would march into someone's office and complain if I thought that would do any good, but Husband doesn't like to make waves. He can make all the waves he wants at home by leaving for Afghanistan, but I can't make even a ripple of discontent with his office. So I will do what he wants which is nothing. Except cry. I'm getting quite good at that. I am almost to the point where I can cry in front of people and they won't even know. Except The Dog. The Dog always knows when I am sad and chooses that moment to lick me which is not helpful and just makes me annoyed. It is really hard to concentrate on crying when some smelly dog is licking you and eating your tissues.

Today was not a good day. I am tired. I am tired of The Dog and of whining children, and the children have not yet tired of whining. So Yelling Mom made an appearance. 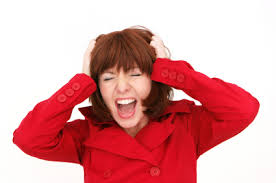 I hate Yelling Mom. She is mean and she gives me a headache and she doesn't really show up all that much, but today she yelled at Child 1 to stop picking a fight and at Child 2 to stop trying to make me feel better and at Child 3 to stop sharpening pencils and just do her homework already! Then she made me eat Doritos until I got sick. I've decided that Yelling Mom needs to go away and so I am in my jammies and I think I will read trashy novels until I fall asleep which will be in about 5 minutes if my stomach will ever settle down from the Doritos. They are gluten-free, but I really ate too many and then I had baked beans on top of that and that was not a good decision. Neither was the yelling. (I'm sorry Children. Feel free to eat all the chocolate people gave me for Mother's Day as a consolation prize. Oh wait. You already did that. Sigh. I so need a brownie. I so miss brownies. Can someone just bring over a brownie so I can smell it?)

This would-be thief in Michigan is having a worse day than me and the children. She loaded up her car with food, dishes, and silverware from a hotel and then got in it to drive away. Only she didn't realize that she had dropped her keys outside, which wouldn't be a big deal, except her door latches were broken on the inside, and she had automatic windows. Which won't roll down without the keys. So yep, she locked herself up with all the evidence so that when the police arrived, she was still there. So thank you, Ms. Careless and Reckless, for reminding me that crime doesn't pay, especially when you are really, really bad at it. And for making me grateful that you can't get locked in our mini-van. Unless you are The Dog and have no thumbs with which to open the door. But then again, The Dog loves the minivan almost as much as she loves me, so being locked in it with a bunch of food would be just heaven for her. Anybody want a dog who likes minivans and eat tissues?
Posted by Jen at 9:28 PM