No, not really. I won't spoil it for you. Child 1 and I went to see a sneak preview of Star Trek Into Darkness and it was awesome. We screamed and clapped and our minds were blown. And let us just say that I will never, ever doubt her superior knowledge of Star Trek lore ever again. Ever. And I have to go see it again! So I can catch everything I missed. If you ever liked Star Trek, then run. Go. Now. Buy tickets! You can get them online with Fandango. Really. Sisters 1 & 2, I am talking to you! Because I have to talk to someone about this movie and nobody else I know has seen it!

It's late, and I'm tired and scared of giving the show away, so we'll get right to the bad day, shall we? First, everyone who has not seen the new Star Trek movie is having a worse day than me, but that's not really fair since we got tickets to a special fan preview that included a free poster. Did I mention it was in IMAX? OK. Enough of the bragging. This 91 year old man in Ohio is having a worse day than me. Doesn't he look like a nice man? This is a picture of him with his granddaughter. 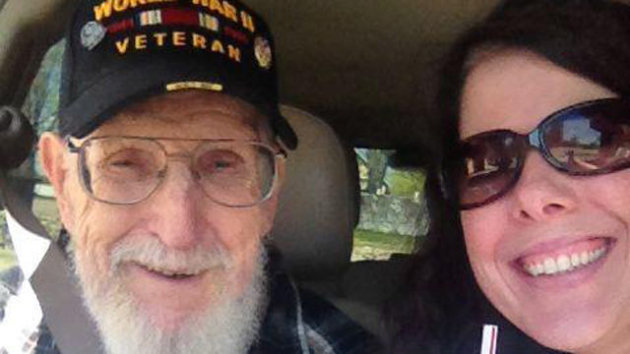 Well, he is nice, but his daughter is a real snake. She used the general power of attorney he gave her to steal his home and then she gave him an eviction notice. He sued to get it back, but lost because the statute of limitations on fraud was up. So now his granddaughter hopes to raise enough money to buy the home back from her mother so her grandfather can continue living in it. Honestly, the gall of that woman stealing her own father's home! Couldn't she have just waited a few years until it became hers anyway? Did I mention that he is a WWII veteran? So thank you, Mr. Veteran, for your service to our country and for reminding me to be grateful that I have wonderful daughters whom I know would never, ever steal my house. My jewelry? Sometimes. Money? Constantly. Make-up? All the time. But not my house. I hope you are able to raise the money and I hope your daughter learns some shame.
Posted by Jen at 11:21 PM