Bad Day 303--The forgetting has begun!

I am starting to forget things, which means I need a vacation. Except, as I have mentioned frequently, I don't have any vacation days because I keep using them to pick up Husband at the airport. So no vacation until Memorial Day. This week, I forgot Child 2's orthodontist appointment, what time a meeting was supposed to begin, and my keys. Luckily, I discovered the keys pretty quickly, but the meeting thing was a big disaster. The sad thing is I actually wrote down what time the meeting was supposed to start and set a reminder in my calendar and still, I forgot.

So after the orthodontist appointment today (which thankfully had already been re-scheduled so when I forgot the appointment on Tuesday I had until Thursday to remember it) I took a nap. I wish that I could say that fixed the forgetting problem, but alas, no. Because I forgot to make dinner. So we decided to walk to 7-Eleven to buy fritos to make frito pies. Then we looked out the window and saw the black clouds and decided to drive. I felt a little sheepish driving a whole block, but I really don't like getting wet and it rained really, really hard today. So hard that it reminded Child 1 of monsoon season in Asia and she said she missed it. Which means she has completely forgotten what a real monsoon is like. 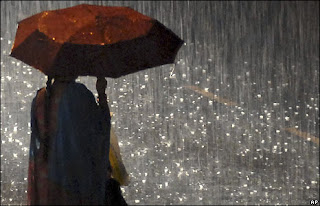 Sure, it looks pretty, but it is the worst to walk around in. The first time we moved to Asia, it was during monsoon season and I had no idea how wet I could be. It rains so hard that umbrellas make no difference because the water is bouncing up from the ground so you are going to be wet no matter what. It is also too hot to wear a raincoat, especially one that will keep you dry. And forget about rubber boots. The other thing you have to know is that when you move overseas with the Foreign Service, they ship your car. That is a great thing--when the car finally clears customs, but it took ours 3 months which meant that the entire monsoon season, we had no car and I was walking around with a plastic cover on the stroller (because Child 3 was a baby and I couldn't leave her at home alone) and wearing flip-flops because there was no point to shoes and everything I owned was damp. I hated monsoon season. But for the children, monsoon season means this.

So maybe it's really being little and having no responsibilities and being free to play in the rain that Child 1 misses. I guess I would miss that too. But not the damp clothing or the mud on the carpet or the pushing the stroller through the rain and praying the wheels wouldn't rust. I don't miss that at all.

This would-be gardener in Brooklyn is having a worse day than me. His superintendent found plants like these growing on the roof and immediately called the cops.

Because who wouldn't call the police when someone is growing marijuana on the roof? Except, if you know anything about plants, you know that those are not illegal. Because they are tomato plants and look nothing at all like pot. But apparently the police weren't sure at first, either, which is probably a good thing because what kind of cops would they be if they were really familiar with growing pot? But the saddest part of the whole story is that the super threw the plants away anyway because no one is supposed to be up on the roof. I bet he hates tomatoes. So thank you, Mr. Tomato Killer, for reminding me to be grateful that the farmer's market will be around again on Saturday and they will have some delicious tomatoes. Also mushrooms, cheese, and organic Italian sweet sausage. I can't wait!