I discovered that we have Nephews 4, 5 & 10 here. I told you I lost track! So today I spent the day figuring out how to steer a wheelchair. Sister-in-law 3's very smart husband suggested renting one so that they could push me around the National Mall and then I wouldn't have to stay home or use crutches. So I called a place and they were open and I got the wheelchair and the clerk also had a fractured foot so we compared casts and she decided my pink one was better than her  pale yellow and then we both talked about how ugly the surgical shoe was, but unfortunately necessary. She is going to London next week and I wish her luck. Those cobblestones are killer.

Anyway, we took the metro in to the Mall and had lunch at the American History Museum and went and saw all the fun stuff which for me means Kermit the Frog and the First Ladies' dresses. We also spent a lot of time looking for Abraham Lincoln's hat which was supposed to be there, but we never found it. We did see Benjamin Franklin's cane, though. I love that museum. It's like America's attic.

Then we walked down to try to see the memorials, but they were closed because of the concert/fireworks. So we'll do that another day. We came home for dinner intending to go out again to see the fireworks, but everyone was hot and tired and my arms hurt from propelling the wheelchair so we stayed home and roasted marshmallows instead. I discovered in small spaces it was easier if I moved the chair myself because the children kept banging me into things. I also discovered that people pretend not to see wheelchairs because then they can scoot in front of you and see up close and push you out of the way. Also, they expect you to be able to go around them like you are walking, but you're not walking and propelling a wheelchair around someone is much harder than just stepping sideways. And Child 3 should never be in charge of pushing down the hill. I'm just saying. I was holding my breath a couple of times and once just had to scream STOP! It was scarier than a roller coaster.

The owner of this car in Iowa is having a worse day than me because this happened. 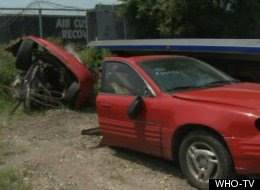 Yes, that is a car that split in two. Whoever was driving it hit a utility pole and it cut the car in half. The driver then ran away. The owner says it wasn't her and she thinks someone borrowed the car but she wouldn't tell police who. So either she is lying and she was the driver, or she is afraid of them because I'm telling you now, children, if you ever split my car in two, I am going to tell the police exactly who did it. Right after I post pictures on your facebook page, which I will continue doing until you fess up. But thankfully, Child 1 is a really good driver and we are moving out of the country before Child 2 gets her license. Husband promised me we would. To a country where she won't be allowed to drive or there are no cars, just cows and maybe an antelope or two, although those can be dangerous to bicycles. 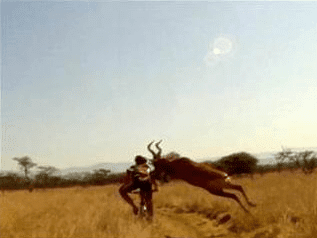 So thank you, bad driver, for reminding me to check what the driving age in Senegal is--just in case. And to the country of Senegal, if you want to say that no American children are allowed to drive in your country, that will be OK by me. I am fine with her just riding a bicycle. Just watch out for the antelope, Child 2!