I went shopping for swim noodles today with Child 3. If you have children in America, you probably know what swim noodles are.. If you don't, then they are big foam tubes that apparently ALL American children must have or swimming is not the same and they will be laughed at by all the other children who possess noodles. The last time we bought noodles, we were on vacation in Florida. I must have had a brain lapse because apparently at that time I bought four. We only have three children, unless you count The Dog who did not go with us. Or Husband who did, but isn't a regular noodle user. Of course I can't find those noodles anywhere because I think it is still Tuesday. And Child 3 longingly remembering the days of noodle abundance said, "Remember in Florida when you bought us 4 noodles?" I said, "yes, and Dad kept poking you in the bum with them." She put her hands on her hips and gave me The Look and said, "Mom, that was you!" Because that is the kind of mother I am.

Child 2 and I thoroughly enjoyed the Jimmy Kimmel video where parents give their children bad Christmas presents and then film them. We laughed so hard at the mother who gave her kid a potato and said "Look! You got a Mr. Potatohead!"

So for her birthday that year, Child 2 got a potato. She laughed for 5 minutes straight. She laughed so hard she had to stop opening presents. Child 3 hates Justin Bieber, so we wrapped all her Christmas presents in Justin Bieber wrapping paper. Child 1 is usually my co-conspirator in these escapades. Husband is still angry about the time we fake spilled nail polish on his Blackberry for April Fools. He was angry, but it was really funny. It is going to be hard to find a way to prank him in Afghanistan. I'm open to ideas, though.

Today, this man in Nebraska is having a worse day than me. And apparently will keep having them until his lease runs out. Because of these: 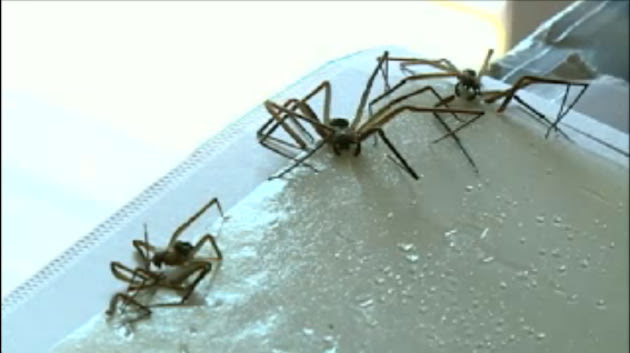 A nest of brown recluse spiders has invaded his apartment, and instead of killing them or moving like any sane person, he has opted to learn to live with them. He either isn't afraid of spiders like I am, or he is very, very stubborn. So thank you, Mr. Spider Roommate, for reminding me how horrible it was when the ants swarmed in my apartment in Norway and how happy I am that it has never happened again, and how thankful I am that I don't have one brown recluse spider, let alone 40 in my house.
Posted by Jen at 12:00 AM