Bad Day 359--The Case of the Kidnapped Keys

A ghost stole my keys. I know you don't believe me, but let me lay out the facts and then tell me if I'm wrong. Last night I came home, let myself in the back door with my keys and walked through the house to the front door to let in Sister-in-law 3 and her family. I then put my keys on the coffee table next to our extra set so there were two sets of keys there. I told SIL 3 that she could use the mini-van tomorrow to go to Mount Vernon. She asked where the keys were, and I said on the coffee table. So we chatted and I went to bed and blogged, and fell asleep.

In the morning, I woke up, got ready for work in record time and went to gather up my stuff and couldn't find my keys. I looked all over the house for 30 minutes. I stripped and re-made the bed. I pulled the cushions off the couch. I even went out and looked around the car, but I knew they weren't there because I had used them to let myself in. I saw the other set of keys on the coffee table and thought, oh, SIL 3 must have grabbed mine instead, so I took the others and left for work. I call home at 9:30 to make sure Child 2 walked the dog and SIL 3 said she couldn't find the keys anywhere. I said, didn't you take the set with the big lanyard? She said no. So I got Child 2 on the phone and directed her to look in all the usual places. She tore my room apart almost literally--no keys. Not in the bathroom or kitchen or living room or couch. Not in the bed or the nightstand or on the dresser. Nowhere to be found. So SIL 3 and her husband decide to go to DC instead because they could take the metro and they had a lovely time at the Natural History Museum where I met them after work and we chased butterflies. We also saw the Hope Diamond which is lovely, but my favorite piece is really this necklace. 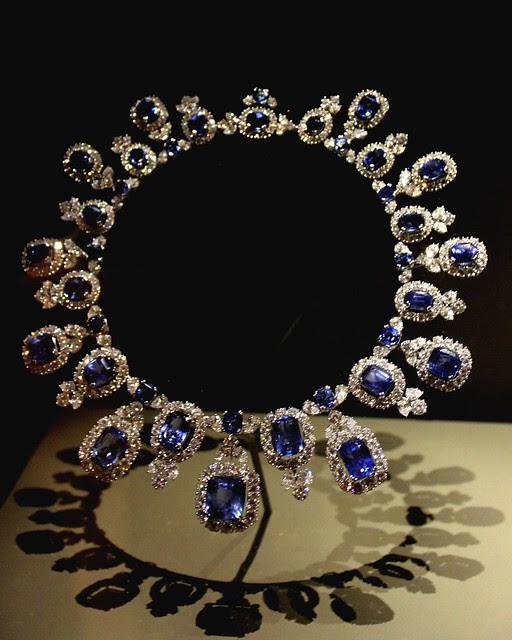 I know. I have expensive taste, but I've always been fond of sapphires. Anyway, I came home determined to solve the mystery of the keys and thought, I'll try the bed one more time. So I pulled back the covers, and there they were in the middle of the bed. Except remember that I had stripped the bed in the morning down to the bottom sheet and there were no keys. So either they were invisible in the morning, or they weren't there and someone (or something) put them there later. So my theory is a ghost who has a particular grudge against Mt. Vernon. Either that or Chinese spies. One or the other. Seriously, do you have a better theory?

This would-be exercise king is having a worse day than me. After two days of doing some program called BMX50 or something similar, he ended up like this. 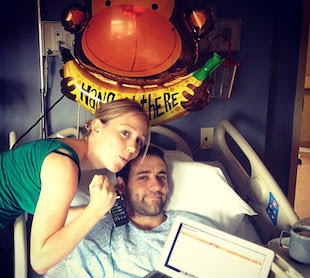 Yes, that is him in the hospital experiencing something called rhabdomyolysis. It sounds horrible, and it is. It's what happens when your muscle fiber breaks down and enters the blood stream and shuts down your kidneys. Thankfully, he survived it, but honestly, it does not sound like a lot of fun. So thank you, Mr. Overexerciser, for reminding me to be grateful that my broken foot will keep me calm for quite a while. I don't think using crutches or a wheelchair puts me in the same kind of danger. But then again, even when I was going to the gym a lot, I'm pretty sure I wasn't over exercising. Um, nope. Really sure that wasn't my problem at all.