Husband is home. R&R is a blessed thing and I am so very glad everyone else on Husband's team was scheduled for leave in September so that he had to come home early, especially because it means that he is here on our anniversary. It's been a wonderful day catching up on all we missed and the children are literally bouncing around the house with happiness.

We started out by surprising Husband by not following his instructions to meet him at the airport curb. I mean, who welcomes someone home from Afghanistan by driving by and letting them hop into the car when you slow down? So he was on the phone calling us to tell us he was coming out of customs when he saw us and the children ran up to hug him and he was beaming and we all kissed him, which was itchy because he came back with a very scruffy beard because his razor broke a week after he got there. Then we made him breakfast (eggs, sausage, and crepes) and looked at pictures of Afghanistan which looks remarkably like the ickiest parts of Nevada, but without the paved roads and high tension wires.

And we also looked at lots of pictures of rugs, because apparently what you do in Afghanistan when there is nothing to do is go rug shopping and you don't buy anything because you want your wife's input which is a good thing because the rug you like is a "conversation piece" which is never a good idea for a rug. Here is a picture of one we both agree is really ugly. 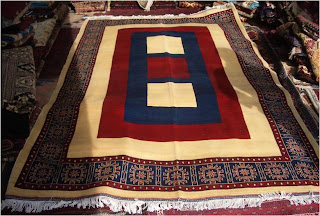 And then we spent the rest of the day cleaning up dog vomit because The Dog decided that this was a really good day to eat some grass and get very sick all over the house.

The children are grumbling a bit because we are leaving them to go have a romantic dinner and be all mushy about our anniversary and gaze into each other's eyes over fabulous pasta. But they are getting pizza so quit complaining and for heaven's sake finish cleaning your rooms!

Lots of people are having a worse day than me today, but this guy really is. I know people have mixed feelings about permits to carry weapons and I understand after Aurora why someone would go armed to a theater. But can we all at least agree that if you shoot yourself in the behind while sitting down in a public place that you should not be allowed to have a weapon? So thank you, Mr. Sore Behind, for reminding me not to carry a gun in my pants without the safety being on.
Posted by Jen at 5:42 PM