I started out the day with very good intentions which all went downhill at 10:30 when I was starving and all there was to eat was 1/2 of a stale doughnut. So to make up for the doughnut, I later had a box of Good N Plenty and a bag of Cheetos. This is the problem I have every time when I try to eat healthily--I make one mistake and then I just give up and gorge on whatever is the most unhealthy thing that I can find that isn't chocolate, because God hates me and made me become allergic to chocolate two years ago.

I think I've been on a diet my entire life. I have an encyclopedia of what I should and shouldn't eat in my head, with an annex of what I actually can't eat. No chocolate (allergic), bacon (migraine inducing), ham (migraines again), potatoes of any kind (high glycemic index and bad for you), candy (sugar will kill you), pizza (nothing redeeming about it nutritionally),  pasta salad (simple carbohydrates and mayonnaise are a deadly combination), or cheese (just slap the fat in it right on my thighs.) By my calculations, that leaves liver, Brussels sprouts, and bananas--all of which I hate. Is it possible to survive on only vitamins and milk?

The problem with diets is that none consist of foods that I want to eat. If there could be a diet that is mostly french fries, ice cream and Cheetos, I would stay on it forever. But since I actually have taste-buds, I just can't get on board with an all grape-fruit, or a no starch, or a soup only diet. Someone once said to me that if I'm hungry, why don't I just eat some carrots instead of a brownie? (This was obviously before I was allergic to chocolate.) And I thought, you skinny idiot, you completely do not get it at all. Carrots do not taste like brownies. They are not a forbidden indulgence. They aren't silky or sultry or luscious in any way. In short, brownies are Daniel Craig as James Bond and carrots are Ban Ki-Moon giving a lecture on foreign policy. You know the foreign policy lecture is good for you, but it's such a chore and wouldn't you so rather have James Bond? Anyone who says no is a liar, or blind, or a blind liar. See what I mean? So maybe when I want a brownie, I should just watch Casino Royale. I think that could actually work. I'll call it the Bond Diet. Let me know if you would buy the book, which would just be filled with pictures like this. Today, in honor of the almost end of summer,  anyone swimming in this Chinese swimming pool is having a worse day than me. 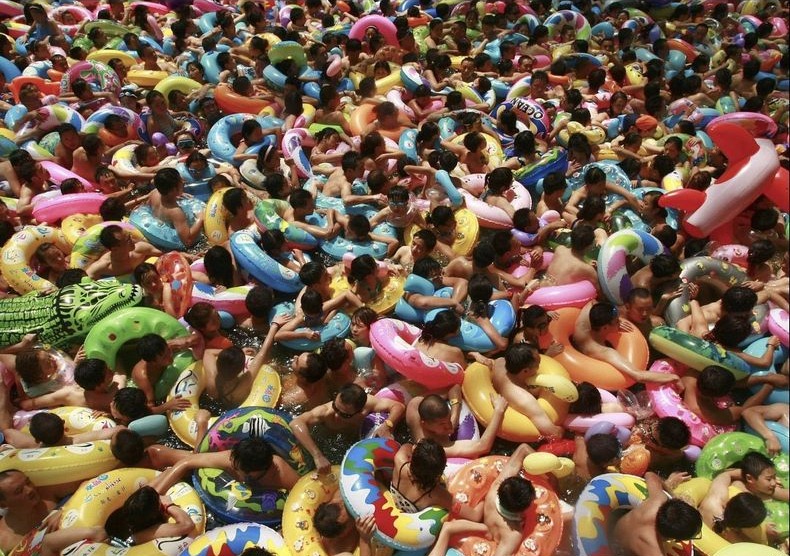 I know what you are thinking, and you are wrong. There is actually a pool under there somewhere in that lifeguard's living nightmare of a water park. See, the thing about having 1.3 billion people in your country is that it is crowded. This is what I mean when I say "it was China crowded." and since we all know what people do in the pool that they shouldn't and grosses everyone out, then there is no place safe to be in the water at this park. So thank you again Bobbi, for sending me this story and reminding me how glad I am that I never went to a water park when I lived in China and how grateful I am that American fire marshals are so strict about capacity.