My Drawer of Things That Might Fit Me Someday has been emptied and now is the Drawer of Things That Are Too Big But I'm Afraid to Throw Away. First, some of them are very cute and I want to get them altered if my weight ever stabilizes, and second, what if I start to feel better and regain all the weight? I know that if I were actually dieting and trying to lose weight, Dr. Phil or Dr. Oz or Oprah would all tell me to get rid of the fat clothes. But see, the thing is, I'm not trying. I'm just shrinking, mostly because I never feel like eating and I know I will feel worse if I do. So I don't think the regular diet rules apply.

It's like this. When I was pregnant with Child 1, I was nauseous all the time. Husband and I were both working and we would arrive home after a long day and neither of us would want to cook dinner, partly because we didn't know how to cook anything very well and partly because the smell of cooking meat made me violently sick. So every evening, we would drive around the city past all the fast food restaurants and have a conversation a long the lines of Do you feel like tacos? How about chicken? Burgers? Pizza? Nothing? And eventually we would arrive at Arby's where I would eat a roast beef sandwich with no sauce and feel immediately better. I craved Arby's roast beef with every single child. Also olives, both green and black. All the children love Arby's and olives. Coincidence? 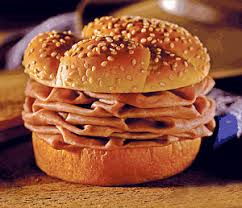 But the problem I have now is that not even Arby's sounds good, so I just cook stuff for the children and pick at it. Tonight, I had to buy milk, so I just got a roast chicken and some potato salad because I wouldn't even have to cook that plus the children love it and say things like "we don't have to save any for Daddy!" I think they ate all the potato salad. I wouldn't know because I was so exhausted that I'm now in bed wearing my pajama pants which are way too big and keep falling down and one of Husband's shirts because my room is cold and the shirt is very warm, and also I miss him.

I realize that reading about how sick I am must be very boring. Believe me, I'm bored with it myself. But since this blog is mostly for Husband to keep up with what's going on, you'll just have to put up with it for a while until I can find the energy somewhere to be funny again.

This man in Canada not only isn't funny, he's having a worse day than me. He apparently decided to be a real grinch and went to a Christmas parade wearing his hair in devil horns and went around telling children Santa isn't real. The police did the right thing and arrested him. I love this quote from the article:

“It was pretty despicable that someone, during this time of the year, would tell kids Santa isn’t real — which of course we would argue,” Const. Steve Koopman told the Toronto Star.


So thank you, Contsable Koopman, for restoring my faith in humanity and for setting the record straight. Of course Santa is real and that grinch of a man is on the naughty list for sure.  See, Santa is crossing him off right now. 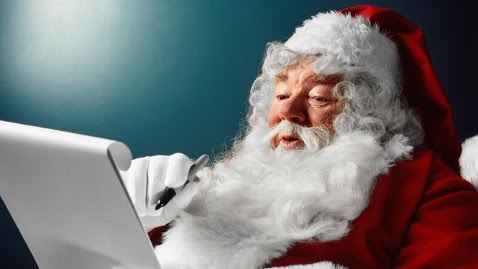