In every relationship there is always someone who loves the other person more. In my relationship that is definitely The Dog. I'm not sure what I ever did to earn The Dog's undying affection, but apparently it was something enormous, like breathing, or existing. I'm not exaggerating when I say that she needs to be in the same room with me at all times. She has even figured out how to get in my room when the door is locked, and I was locking it to keep The Dog out. So now I have to use rubber bands to tie the door handles together which is very unsafe should there ever be a fire and I need to leave the room quickly. It also makes the children very frustrated because they also cannot enter the room and they try the door handle over and over and push and nothing happens and then they yell.

You would think that the children would have figured out about locked doors right now, but these children have no boundaries--not that I didn't try to set them. It's just that they ignore them. All. The. Time. It started when they were small. I would run a bath for me and Child 1 would run and get her ducks and throw them in the tub and climb in. Um. Great. So much for privacy. I know it's my own fault for not locking the door, but all three of them would scream and pound on the evil thing that was between them and their mother and  it is not very relaxing to be in a bath with a screaming toddler on the other side of the door. So basically, not much has changed now that they are older.

Now the boundary crossers do believe in privacy, but instead of barging in on me in the bathroom, they just steal my stuff. Jewelry and make-up occasionally, but always my hair brush. I was so tired of going on the hair brush hunt daily that I bought a second brush, and they take that, too. So next time you see me, if my hair looks like this, just know it's because someone has taken my brush! Again! Good thing their feet are bigger than mine so they can't take my shoes or it might mean war.

I am pretty sure this woman had a worse day than me. 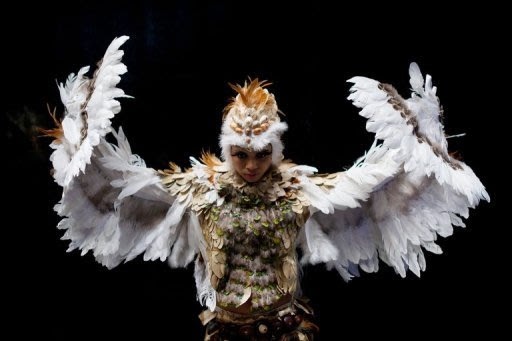 This is a Miss World contestant, not someone auditioning for Harry Potter the Musical for the role of Hedwig. While other contestants were wearing native costumes or princess dresses, this poor woman's country decided she would look better as a bird. So thank you, Miss Fiji, for reminding me to be grateful that I will never ever have to wear feathers like this.
Posted by Jen at 10:18 PM