I go back and forth these days between being Eeyore and the Little Engine That Could. Sometimes I think we'll make it and other times I just think "oh, bother." Right now is an oh, bother moment. Earlier today I was more optimistic, but that was before I smashed my finger in a drawer (I think I'm going to lose the nail) but after someone at work recognized that I had been right about something all along. If I weren't allergic to chocolate and wheat, I would just eat a brownie and go to bed, but I am, so I'll only do the last half of that.

I can hear the theme-song of the A-team coming from upstairs. No, not the stupid movie with that guy in it that I hate, but the original with Starbuck from Battle Star Gallactica. You know, where Mr. T says "I pity the fool." I did not introduce Child 1 to the A-team. I think her cousins did and now that she is fascinated with the Vietnam War, she is watching 80s shows about Vietnam Vets. It's weird to think that to her, Vietnam is as far away as WWII was to me when I was her age. Also, to her, Vietnam was the place with the awesome overnight train up into the hills where we saw terraced rice paddies and pet a water buffalo. 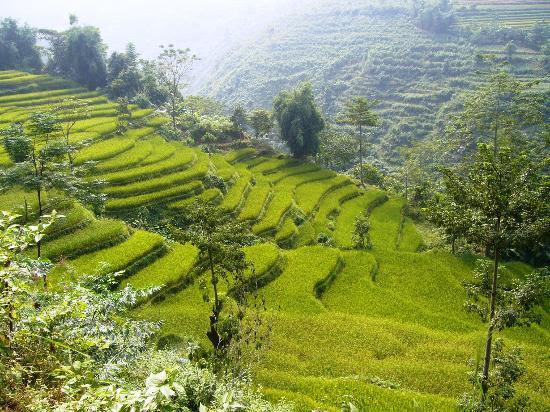 We also were introduced to restrooms that were a hole in a board over a stream. The hills are still ringing with Child 3's screams because she was not going to use that board if it killed her. She was only 4, but she held it in for four hours until we finished our hike. Then later when we were on a cross-country road trip in the US and stopped at a rest stop, we decided that dragging our kids around Asia was a great idea because even the oldest, yuckiest rest stops still seemed luxurious to them. Mom, they have toilet paper! Yep. Low expectations are the key to a happy road trip.

We also learned that people in the hills in Northwest Vietnam had no idea where America was or that we had ever fought a war with them. They all knew about the war with China, because their parents had  told them about it. But "Nam" never touched them, or at least the women we talked to had no memory of it. 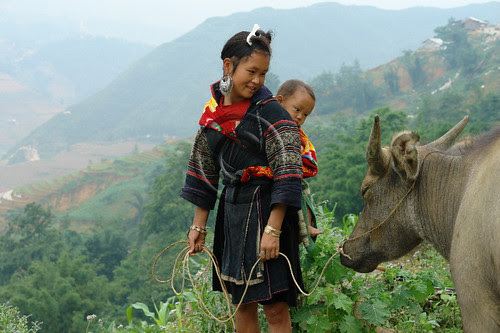 They thought we were Australian or French and were happy to walk with us for five hours just to try to sell some ribbon bracelets. I still have the bracelet I bought, and the satchels, although the indigo dye they used rubs off on your clothes, so we don't use the bags. Someday, I will figure out how to make the dye not run and then I will use one for a purse because they are beautiful and I like to remember how privileged I felt being able to meet them and learn about their lives but still leave the dirt-floor huts and travel back to my house with air conditioning and hardwood floors. Traveling sometimes makes me feel happy and guilty all at the same time.

The people sitting behind this woman at Ascot are having a worse day than me.

Yes, it is very intricately designed and not only does it match her shawl, it is made out of chocolate wrappers. But for heaven's sake! It is going to block the view of about 25 people. If you only go to Royal Ascot to see the hats, then you are my kind of person, but it is actually a horse race and I can imagine people getting a little testy having to sit behind someone whose hat is bigger than a sofa. So thank you, Ms. Chocolate, for reminding me that chocolates are for eating, not wearing, but no thank you for reminding me how much I miss a good chocolate bar. Somebody bring me one so I can smell it.