My birthday wish came true and federal government was closed today because of snow. I was so hoping it would be and really happy when my alarm went off at 5:30 and I checked the OPM.gov website and found out we didn't have to go in today. School was canceled, too, so I turned off the alarm, didn't wake up the children and we all rolled out of bed around 9:30 very refreshed. We had a yummy late breakfast of fried potatoes and scrambled eggs and then I did nothing all day. OK, I did cook the breakfast, but I didn't do the dishes, and mostly I just played on my computer, looked around  Pinterest, and watched Magnum P.I. on Netflix. I love that show. I love Hawaii. I love Tom Selleck. It was a good birthday. 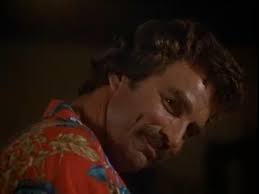 I should also mention that some friends brought me flowers and cake and we had Thai food for dinner at the place that has a gluten-free menu and I am full and happy and tired and going to bed.

This girls basketball team in California is having a worse day than me. Their coach was upset that they got a third seed in the regional tournament when he thought they deserved a first, so he threw a temperfit and said he refused to show up for the tournament, so the officials left them out of the tournament altogether. Here is a picture of their coach. 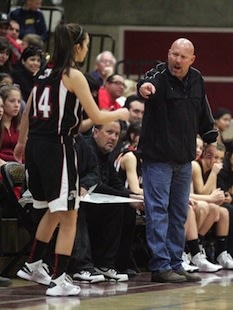 Yes, that's correct. His bad temper cost his team their spot in the regional post-season tournament where they probably would have done really well. So thank-you Coach Angry, for reminding me that competition and selfishness are two different things. Because of your bad behavior, your team learned a hard lesson. True, it is one they will never forget and there is value in a bad example, but still. It's a shame that they have to pay for your poor sportsmanship. You also said you probably wouldn't return as coach next year. I'm certain I'm not the only one who really hopes you don't.