Bad Day 262--You would think this would be easier

I honestly thought I would get better at the good-byes, since I send Husband off so often, but they are painful and wrenching and awful every time. He doesn't even leave until tomorrow, yet I have been crying all day. I have completely given up on makeup today because there is no point. Also, I have run out of tissues--twice. OK, they were small packets and both half empty, but still, you would think I would know better and just walk around with a big box of Puffs with lotion by now. It has to be the lotion kind because the other tissues disintegrate with this much crying into them. Also, my nose gets red and raw.

Child 1 has been her grumpy self all day and Child 3 has had her moments, too. Child 2 is brimming over with optimism and telling jokes and making everyone laugh. Whose child is this anyway? Oh right. Husband's. I am too heartbroken to write much more and I feel like I'm wasting time writing when I could be spending it to him, so right to the bad day, if I can find anyone having a worse day than me, that is.

This homeowner in California might be having a worse day than me. He was inside his house with his dog, when two brown bears decided to break in through the doggy door and raid his refrigerator. They ate his Chinese food and stole a box of dog food before animal control arrived and fired beanbags into the air to scare them off. Here is one of them contemplating what to do with the TV. 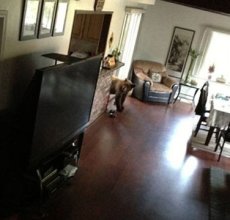 So thank you, Mr. Bear Host, for reminding me to be grateful again that there are no bears where we live. And also that we have no doggy door. It is a pain to have to take The Dog out every single time she needs to go, but if it keeps the wild animals out of my house, it is totally worth it.
Posted by Jen at 6:28 PM