It is 7:30 pm and I am in bed in my pajamas and I have been here for an hour already. It has been that kind of day. It will be better on Sunday when we meet Husband at the airport, and it is the beginning of Spring Break and I am taking the week off, so you would think today would have gone better, but that was until the thing. The thing is I forgot something. Something hugely important. Something that could be devastating. I can't go into what it is, but let us just say that it's a big thing. A big freaking huge thing. The kind of thing that can ruin everything. (No, I'm not pregnant! Quit going there!) So I have fixed the thing, but it may be too late and I am very, very stressed about it.

To be fair, Husband completely forgot the thing, too. So it's not completely my fault, but I am the mother and I am in charge of everything and I have to handle it because he is not here. Sunday. I can make it to Sunday. Without chocolate. Maybe. Maybe?

At least I didn't have to cook dinner because I ate Stevie's lasagna which was gluten-free and incredibly delicious. She makes it in a skillet and it was awesome and a lot less complicated than the oven kind and I think I can re-create it. I am totally up for the challenge. After the thing is all taken care of. And Husband is back in Afghanistan because I am taking the week off and that means from everything. I am not going to cook. Not a thing. It is a vacation and I am completely making it one. Plus Husband only has one week, so we are making it count. No work. No laundry. Lots of fun and someone else cooking. I can't wait for Sunday.

This man in China is having a worse day than me. He was wearing a "Wanted" t-shirt like this one. 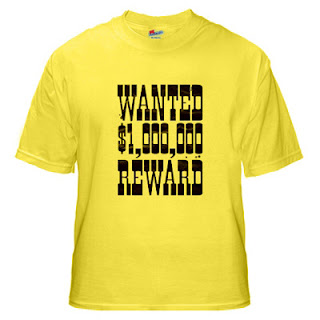 He doesn't speak English, so he had no idea what it meant. But a policeman in his town did and asked him about it. When he responded evasively, the policeman got suspicious and asked him more questions and then checked his status. And it turned out he was wanted on drug charges. So the policeman arrested him. So thank you, Mr. Wanted, for reminding me not to ever wear anything that might make a policeman ask me questions. And to also not commit crimes, which should not be a problem. Now excuse me because I have to watch hours of "Say Yes to the Dress" which has become my new substitute for chocolate. Sunday. Sunday. Sunday.