Lots and lots of cookie sales today. It was the last weekend of Girl Scout cookie sales, so both children who are Girl Scouts had booth sales to work at, which of course meant that I also had booth sales to work at. And that I bought $40 worth of cookies. Which I can't eat. So we are sending our cookies to Afghanistan. Literally. When I talked to Husband on Friday, someone in the background reminded him to ask about the cookies, which I assured him were coming. All the extra money donated to the troop is going to buy boxes to send to his post to share with the troops. I hope they like Thin Mints, because that is what they mostly have left. But then, who doesn't like Thin Mints? I even like Thin Mints and I am allergic to them. I miss Thin Mints. And brownies.

It is late, but the children and I are watching Brigadoon, and we can't go to bed until it's over. 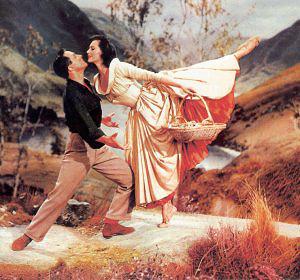 Brigadoon is one of the most romantic movie musicals ever. I mean, seriously. How can you look at that picture and not sigh? The first time I saw it, I knew I wanted to be just like Cyd Charisse when I grew up. Unfortunately, I am not a tall, leggy, beautiful brunette ballerina. More like the opposite of that. But still, I can pretend. When I was explaining about who was in the movie to the children, I told them it was Gene Kelly from Singing in the Rain, which they love. Child 2 asked if that was the girl who popped out of the cake or the one with the funny voice. If you don't get why that is such a hilarious question, then you need to watch more musicals. The most fun part is watching Cyd Charisse walk with her knees bent through most of the movie trying to pretend she isn't six inches taller than Gene Kelly. But hey, if I had to squat in order to be in a movie and dance with him, I'd do it. Heck, I'd walk around on my knees for months for the chance to dance once with Gene Kelly. Or someone like him. Maybe Mark Ballas. He is not the blonde in the dress. Hendrix, and English Springer Spaniel is having a worse day than me. His owner was on her way from New Jersey to Phoenix, which is in Arizona, which is west of New Jersey. However, apparently United Airlines did not know that and put Hendrix on a flight to Ireland, which is east of New Jersey. Across an ocean. And is a whole other country. Of course the owner was devastated when she arrived in Arizona and found her dog was half-way around the world. United says they have apologized and refunded her money. I certainly hope so! Because they charge an arm and a leg to fly pets cargo just across the US, let alone to Ireland. So thank you, Hendrix, for reminding me to be grateful to double-check our tickets when we fly to Arizona this summer, just in case. And to be grateful that we are not taking The Dog with us. But next time we fly with The Dog, if she accidentally ends up in Ireland, she can just stay there. Really, it will be OK. No need to fly her back. Maybe we should take her to Arizona after all.