100 bad days and i have to say, that although the wound of Husband leaving for Afghanistan isn't quite as raw, being without him still stinks. I hate it. Hate every minute of it. It's stressful and awful and I don't ever want to do it again. My hat is off to those of you who do multiple tours apart. I admire you a lot, but I sure don't want to emulate you.

In the lower grades, there is usually a party on the 100th day to celebrate that the kids can count that far. Everyone has to bring in 100 something. I was in charge for both Child 1 and Child 2 and they both made posters that said "100!" in 100 Cheerios. Ours were on poster board, but you can get the idea from this picture.

Husband, for some reason, took over with Child 3 and decided that a poster of Cheerios wasn't good enough so we had to do something more elaborate. (Seriously, Babe! It was 1st grade and it's not like there was a prize for the parents who do the most work.) So instead of the quick and fast and fun Cheerios project, we had to make 100 origami cranes for her project. I hate folding paper cranes. Child 3 didn't fold a single one because they were too hard, so for days, Husband and the other two children and I folded the darn things. I never want to fold another crane for the rest of my life. Thankfully, the children are all too old for such things now and also I am in charge of absolutely everything this year, so easy is the way it's going to be. Volunteer to be a coach for Odyssey of the Mind? No. Lead a Girl Scout troop? Nope. Sew the Halloween costumes? Not going to happen. However, I will cook the entire Thanksgiving dinner from scratch. A girl has got to have some standards.

Apparently, Virginia is not the only crappy state to hate people who serve our country because this woman in North Carolina is having a worse day than me. 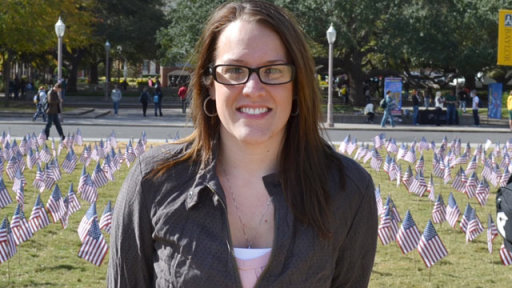 She is a veteran and bought a house with her husband in North Carolina. She was sent to Iraq, then came back to NC, then they were sent to Texas, but still paid taxes on the house. Then when they were sent back to NC after Texas, she tried to enroll in UNC, but they don't consider her a resident so she has to pay out of state tuition, which the GI bill won't cover. So thank you, Ms. Perez, for your service and for reminding me that it's not only Virginians who get treated badly by our state. Good luck with school and tell UNC they stink.