Apparently, the toilet problem calls for replacing a part that costs around $6 but will require some expertise to fix, so I am either going to have to take a day off from work and call a plumber, or pray that it will hold out until Christmas, which is the next time that Husband will be home. I found out the bad news tonight when my friend "Lisa" brought me dinner and her husband to look at the toilet. Both were very sweet because I had asked for neither. She came to see me yesterday and was so horrified by how bad I look that offered to bring dinner, and her plumbing-expert husband was just a bonus. It would have been even better if The Dog hadn't taken exception to his entering the bedroom where the toilet is and tried to take a chunk out of his leg. Thankfully, we had muzzled her, but she was really going after him, which makes me happy to know she wants to protect me, but horrified that she almost ate our friend. Honestly, Lisa's husband looks nothing like Hello Kitty, so I don't know why she was upset. And also scaring away people who know about toilets does not make me like her any more. So not happy with The Dog right now.

I'm still not feeling well, so I stayed in bed again today. Child 1 badgered me into going on to Pinterest, which I'm still not sure I understand but I find myself surfing the net and looking for things to pin which nobody looks at but me. Is that the point? Because I can spend hours and hours doing it. (Look Husband,  you told me to get a hobby. At least I'm not shopping!) But I've decided that Pinterest is the perfect way to make a Christmas list so Husband can get ideas and order things online. Otherwise I will end up with an airplane model, or earplugs, or whatever else he can find in the airport gift shop right before closing time. So I'll start with this--a potato ricer.

And no, Child 2, it does not turn potatoes into rice which I know is exactly what you're going to ask because I'm psychic, or as Child 1 says--I'm a mom and moms know everything. It mashes them beautifully with no lumps, unless you like lumps, which I kind of do, so then maybe not the potato ricer.

This teenage girl in Wisconsin is having a worse day than me, but her parents are amazing, so maybe it will turn out OK for her after all. She was rude to them and gave them attitude as teenage girls are wont to do, so they took away her phone. And instead of just hiding it from her, like I occasionally do, they took goofy pictures of themselves and posted them to her facebook wall like this one. 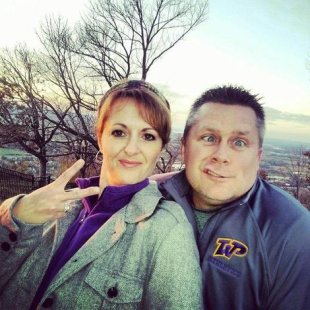 That makes me just smile. So thank you, awesome Wisconsin parents, for reminding me that I'm not the only parent who occasionally grounds her children from electronics, and for having a sense of humor which I promise your daughter will one day grow up to appreciate. And don't be surprised if those pictures show up in poster size at your next anniversary party, because if I were your daughter, that is totally what I would do. But you so rock!
Posted by Jen at 8:37 PM