Today was definitely a purple day at the beginning and I spent the morning with my door shut again because I never knew when I would just burst out crying. If I didn't know better, I would swear I was pregnant because I am exhausted, I burst into tears at unexpected moments, and I'm constantly nauseous. But since for once I know that it's not physically possible unless immaculate conception is more common than we thought or you can conceive just by watching The Avengers, I think it must all be stress related and I probably need to take some of the anti-anxiety medication the doctor prescribed for me when I burst into tears in her office.

Child 1 has found me a hobby and she is blackmailing me into starting it. So I gave in and I'm finally on Pinterest, which I completely don't understand except that it seems like some sort of filing cabinet filled with clippings but it's electronic. Can someone please explain it to me? I don't get the difference between "like" and "repin". Why would you like something but not re-pin it? And then I get the feeling that someday far into the future, anthropologists are going to have a hey-day with all the data they get from early 21st century social media. They will know exactly who I am, what I like to eat, the books I read, my love of fashion, even what shoes and clothing I've bought, but they will have a super hard time knowing what I look like because I don't take pictures. Some privacy is necessary, don't you think? Also, I hate pictures. So if you google me, I look like this.

The makers of this ridiculous costume are having a worse day than me. 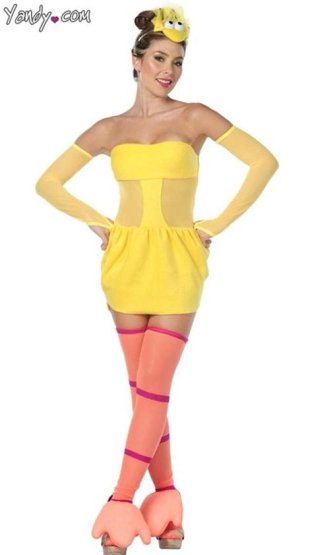 Now, I realize that Halloween to some people means dressing like idiots who think they are sexy but really everyone is laughing at them. But this is beyond the pale. Really? Sexy Big Bird? Apparently the Children's Television Workshop was not amused and sent the retailer a cease and desist letter. I mean, honestly, it's disgusting if you think about it. Juvenile is not sexy, it is just juvenile and a little icky. So you go, Children's Television Workshop! And thank you, Ms. Bird, for reminding me to be grateful that I grew up with such a wonderful children's TV program and that it was still around when I had my own small children to watch it. And thank you for reminding me to go look for my witch's hat because that and a Wicked t-shirt are just fine for me for Halloween.