Someone else is coming to organize Child 2 and Child 3's room and I couldn't be happier about it. Our church had a silent auction fundraiser today, and I bid on someone to come organize one room and I won. Then I went and apologized to her because I think it may be an impossible task. For two years I have tried to get that room into shape, but the universe is against me. OK, not the whole universe, just the two children, but it feels like the fates are thwarting me because just when I get it all picked up, I turn around and all the clothing has magically jumped out of their drawers and scattered itself all over the floor along with toys and hair ribbons and books. And they don't even wear hair ribbons any more. It must be magic because they always swear to me that they actually put away the clothes I have washed and folded for them but then I come upstairs to find them strewn all over the floor and no one is ever responsible. 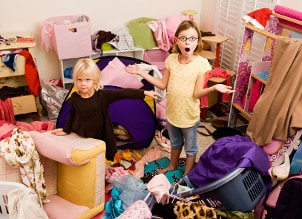 See my problem is that I actually ask them who did it and then I expect them to answer honestly as if somehow truth-telling aliens have come and taken over their bodies and will actually admit that it is their fault. You would think I would have learned this lesson when Child 1 was three years old and I asked her who drew the lips on the wall and she blamed it on Child 2, who was six months old and incapable of doing anything with a glue stick (the artist's medium of choice) besides eating it. But she looked me with those big blue eyes and not only lied, but tried to sell it. Child 3 recently tried to say that she didn't shave her legs (with my razor,) she was just blond so the hair on them was invisible. She tried to sell, that, too. Child 2 is the worst liar ever. So bad that we can't even tell her about surprises because she will blow them at the first opportunity. Still, she is also never responsible for the messy room. Not sure how that works, but it's a nice trick. Maybe I'll try it next time it's time for dinner. No, I don't know who is supposed to cook tonight. I'm not in charge of cooking. It's not my food. Why do I always have to cook for everyone else? It's not fair! I'm not cooking for her. She never cooks for me. I don't want to! Why do I have to? You can't make me!

This first grade teacher in Florida is having a worse day than me because she is a lying liar lie-face.

She doesn't look like a liar and apparently all her students thought she was a good teacher, but then first graders don't really have much volume of experience to know any better. But nevertheless, she told a whopping fib over 100 times which was that both she and her father were dying of cancer. She did it so she could have time off, most of which she spent at home. But lying about something like cancer is really, really stupid because people are bound to find out you are not dying when you don't actually die. That's not something she thought about when she was sitting at home while other people were doing her work. So she's been suspended without pay and may go to jail, all because she tried to lie her way out of work. So children, let that be a lesson to you and next time I ask you who made the mess--don't lie. Because you know I already know and all lying ever does is make Mom mad and get you into trouble. And if you read this post and agree, I will accept your apologies in the form of a hug and a bowl of vanilla ice cream. Now, go clean your room!