The elves with jackhammers behind my eyebrow are back and woke me up at 3:30 am with a monster of a migraine--the kind that all the medicine in the world can't kill. So I called in sick and went back to bed and woke up at 11:30, except for when I walked The Dog and got Child 3 out of bed and pushed her out the door to school. But thankfully, the older two children are capable of getting their own breakfast and getting off to school on their own. AND there is only one more day. One more day of whining, moaning, just 10 more minutes, no, really I'll get up in 10 minutes. Why won't you believe me? Leave me alone! The children are not morning people.

One of them, however, is obsessing about a video game that was supposed to arrive today and hasn't and boy is she going crazy about it. She has asked me no less than 5 times to track the package and she yelled at her sister to get off the computer so she could see if it had been delivered. It actually was, but it was in the box with the dog food which I had put in the garage unopened, because who ships video games with dog food and detergent pods? Apparently Amazon does, so I will have to not assume I can just throw unopened boxes in the garage anymore. Either that, or The Dog will need to learn to like Tide-flavored detergent.

See, the problem with laundry detergent is that after being in the heat, the smell seeps into everything surrounding it. So even if you pack it up with your sheets and blankets, they will still smell very detergenty when they arrive at your next destination and you will have to wash your entire linen closet and the smell still won't dissipate for months. I know from personal experience. I had to wash our blankets several times in hot water with no soap to get the smell out after the last move. This is one of the reasons I'm not so sad that I'm not moving this summer. Since we are doing two DC tours in a row, there will be no packing or boxing or sorting or labeling this summer. I take that back. There will still be sorting and labeling, but it will only be because I can't stand the state of Child 2 & 3's room any longer. Seriously, I spent hours in there last weekend and it still looks like a dump. Something must be done. But not while I have a migraine.

This husband in California is having a worse day than me. He accidentally sold his wife's $23,000 wedding ring at a garage sale for $10. Seriously. This is a picture of the ring. It is one big ring. I won't even get into why she needed such a large wedding ring and why she didn't keep it in a nicer box. But there it is. 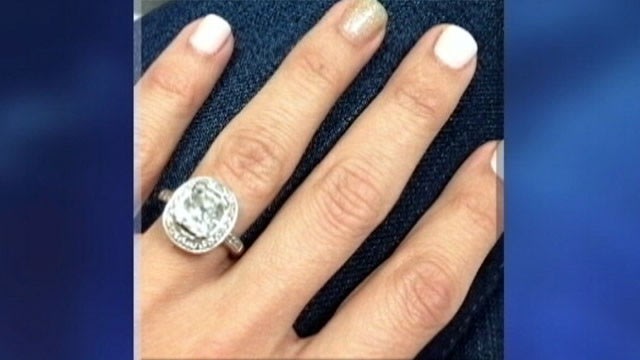 His wife was in the hospital having just had a baby and he thought it would be a great idea to sell stuff at the community yard sale. So without asking his wife if she wanted what he thought was an empty watch box, he thought he would "help" by deciding what to sell on his own. The woman who bought the box did not return the ring, although I am certain he is still hoping she will. But thank you, Mr. "Helper" for reminding me to be grateful that Husband would never, ever hold a garage sale of his own volition and he would never, ever sell something of mine without asking. Or at least he will know now that he'd better not, not that I own anything besides my house that is worth as much as that ring. Remember that my anniversary band cost less than his TV, which I suppose in this case, would have been a good thing. Still, I like my anniversary band and I'm not trading it in for anything, although if he came home from Afghanistan with a nice big ring, I wouldn't turn it down. Just a suggestion.
Posted by Jen at 10:07 PM