Bad Day 328--You cannot stand under my umbrella

It rained really, really hard this morning which meant I had to commute in my rain boots. Now, I don't actually mind commuting in my rain boots, but they are a pain to carry home when it's not raining, which of course it wasn't when I left work. But I suppose carrying them home is better than having wet feet and pants in the morning. See, the thing about walking in the rain for a large part of your commute is that your shoes splash rain onto the bottom of your pants and then the fabric acts like a wick and draws the water right up so that you are wet from ankles to knees. It stinks. I try as often as possible to wear skirts or dresses when it rains, but I already planned my outfit around pants this morning and I was too tired to find something else. Especially after taking out The Dog. 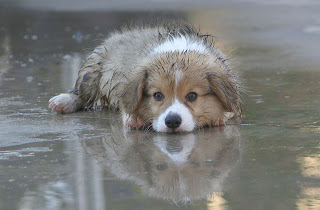 You see, The Dog hates going out in the rain--probably from when she was a stray before we rescued her. But she hates it so much that you have to drag her reluctant behind around the block, literally, until she decides you mean business and then she does hers and by this time you are both soaked and more than a little cranky and I hate walking her in the rain almost as much as she does. But the alternative is having her make a mess on my bathroom floor and then the children will all ignore it and I will have to clean it up which I hate even worse. So we walked in the rain this morning and I was almost late because it took so long.

I found out another thing today that The Dog doesn't like which is gluten-free graham crackers. She found a box (probably the ones Child 3 took camping and brought home) and opened it, pulled out the crackers, and didn't eat any of them. Yippee! Because it's really not very fun to not eat s'mores when everyone else is and those crackers are expensive. You have no idea how expensive gluten free food is unless you also have to purchase it. When a box of spaghetti is $7.50, it kind of gives you pause and you tend not to eat so much. I have become one of those people who shop in health food stores and buy organic and cook everything from scratch and not because I wanted to, but because I have to. I love cooking, don't get me wrong. And making from scratch is always better, but I don't have time. So tonight I used instant rice. Yep. And Velveeta cheese AND canned chili. And the children loved it and it took 20 minutes total and made awesome cheesy-chili rice and there are no leftovers and Child 2 said I'm so glad you found out that rice doesn't make you sick so we can eat this. So another recipe that will become a regular for nights when I don't have time to chop a million vegetables or make tomato sauce from scratch or pluck my own chickens. OK, I was never going to pluck my own chickens, but honestly, sometimes I miss modern conveniences like frozen pre-cooked dinners. And brownies.

The man who received this break-up letter is definitely having a worse day than me, although it appears that he totally deserves it.

It rather speaks for itself, so I'll just say thank you, Mr. Possessions Hunter, for making me very grateful that I have never angered your girlfriend. She is awesome, and very, very devious. I'm so impressed! The hearts were a really nice touch. And good luck with the possession hunting, although I bet the laptop is already gone.