I'm blue. Well, at least my fingers are--a very pale icy blue that is almost white because that is the color beluga whales are and I helped Child 3 paint hers tonight. She has sculpted an awesome, very realistic looking beluga whale out of model magic and then she painted him with acryllic paints and she made a box habitat to put him in that looks like the arctic ocean. She is incredibly talented, that Child 3 and I only helped with the fins because we had a hard time sticking them to the ball and socket joints. But they are well and truly stuck now and her whale is awesome and I am immensely proud of her and of me for actually finishing this on time especially since she was at a camporee with the girl scouts all weekend.

Child 3 has been waiting for years and years to go on a girl scout camp out. When she was 6 and just finishing first grade, I was supposed to go camping with her and Child 2 and their troops in China. But then I got diagnosed with fake cancer and I had to leave early to go back for tests in the US and I left before the camp out. She has been angry with me ever since. So Friday, I sent her off and she spent two days without me not sleeping or apparently eating much and has decided that while being with her friends was fun, camping was not very comfortable and the whole food issue thing is tough to deal with when everyone else is pigging out on pancakes and you have to eat a banana and yogurt. But this is our life now. If I could change it for her, I would--in a heartbeat. But there is no magic pill you can take to be able to eat wheat again when you are allergic and the worst thing would be for her to be sick while she was gone and in someone else's care.

But beluga whales, I could help with and when she got back from the camp out, we worked really hard and she got it all finished. It is awesome. She needs to make a presentation to go with it, but she can do that tomorrow. Right now we are all exhausted from cooking incredibly delicious Caribbean Jerk fish that is poached in coconut milk and cleaning and doing dishes and tossing out recycling and sorting winter clothes and shoes and hemming pants. Oh wait, that was just me. Why is everyone else tired? Mostly, they just napped all day. Even The Dog was snoring while I was sorting. It was quite annoying.

This llama in Florida is having a worse day than me. 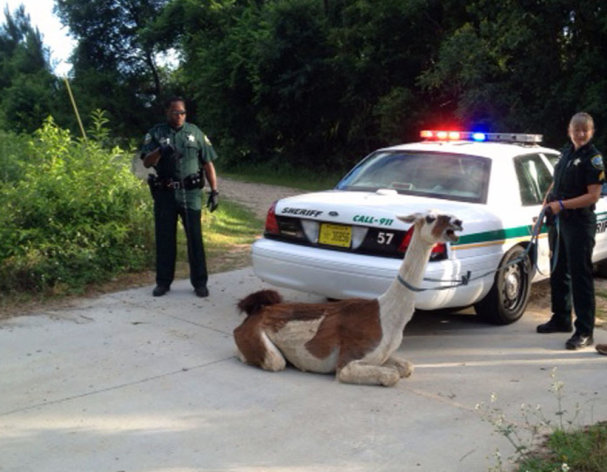 His name is Scooter and he orchestrated a pen break and busted out and ran as fast as he could. Several people called the police to report a camel or alpaca on the loose, but he is actually a llama. Authorities had a hard time catching up with him and had to use a taser to stop him. He is OK and his owner won't be charged with anything, but will have to fix his fence line. Scooter did better than his neighbor the kangaroo who rampaged around town for 10 hours before being tranquilized. What is it with exotic livestock running rampant in Florida? You would think they would be nervous about the alligators, but they didn't appear to phase Scooter at all. So thank you, Scooter, for reminding me to be brave and bold when busting out of prison. And for making me grateful that I probably never will have to. I don't think they'll arrest me for not finishing the dishes tonight. I'm seriously just too tired.
Posted by Jen at 11:02 PM