I have sprained my ankle again. Seriously! I was just telling someone the other day that I was really loving wearing heels because my ankles were doing fine after having broken each of them in China and re-spraining them a year later but they've been good for almost two years, and then Boom! I stepped off a curb at the mall and down I went--right in front of about 10 people. They were all very kind. One woman ran into a restaurant and came out with ice bags and a towel. Another woman offered to drive me home in my car while her husband followed behind. And a kind chiropractor looked at it and said it probably wasn't broken and I should go home and elevate and ice it and not bother with the emergency room. So Child 3 helped me limp to the car and I drove home with the ice tied to my foot in a lot of pain, the whole time thinking I have to be able to drive, I have to be able to drive. Because Child 1 is leaving for San Antonio in the morning and I have to take her to the airport and I will be the only driver.

But we made it home and Artemis stopped by and brought home-made sour cream and bouillon none of which has any maltodextrin in it. then she helped find my crutches and drove me to the pharmacy to pick up my prescription which I couldn't get yesterday because the power was out at the pharmacy. And then we ordered gluten-free pizza from Domino's and now we are watching The Princess Bride. I love that movie. "Murdered by pirates is good!"

It is helping distract me from my big purplish blue ankle and the fact that I have to figure out how to walk five blocks every day on crutches. Stupid glass ankles.

People in northern New Mexico are having a worse day than me. They lost internet and cell phone service for 20 hours and nobody knew why until they caught the malicious culprit. 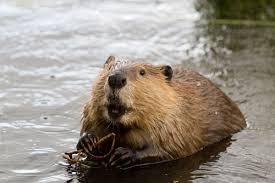 Yep. It was a beaver that ate through the fiber optic line and cut everyone off. So thank you, Mr. Beaver, for not chewing my line because Today would have been a long horrible day without internet and tomorrow would be even worse.