I spent the day in bed, almost literally. I did get up early to take Child 1 to the airport. I happen to own an air cast which I also happen to know is the best way to stabilize an ankle sprain from experience. So I put it on and I used the crutches to get to the car and I made her drive there. Then I hobbled in with her, got her all checked in, saw her go through security and then hobbled back. There really ought to be a way that people with ankle sprains can get a temporary handicapped sticker because every muscle in my body now hurts from that effort. I forgot what a strain crutches put on your shoulders and arms and hands and neck and the leg that isn't hurt. So I managed to drive home with the cast (thankfully very little traffic so I didn't have to step on the brakes a lot) and I came home and went to bed and stayed there for the rest of the day.

I'm not kidding. Child 3 heated up leftovers for me for lunch and brought them up while wearing Groucho Marx glasses to cheer me up and we ate lunch in my bed. Then Child 2 came home from church and I tried to make them watch Pride and Prejudice with me, but they fell asleep instead so we all took a nap together--even The Dog. It was lovely. Now back to Pride and Prejudice, it was the 2005 Keira Knightly version.

I have to say that when I first found out that they were making a movie and Keira Knightly was going to be Elizabeth Bennet, I was really mad. I didn't happen to think that she would be able to pull it off. Pride and Prejudice is one of my favorite books and I read it every few years. I love it so, so very much and the BBC version with Colin Firth was perfection itself, so why would you want to tackle that? (A side note, if you have seen the BBC version and you want to laugh out loud, you must read Bridget Jones: the Edge of Reason. There is a scene in the book that isn't in the movie where Bridget interviews Colin Firth about the pond scene. Best interview ever!) But I saw it anyway prepared to hate it and I didn't. It was lovely. The BBC version is still better, but you can't watch that all in one afternoon. And for 2 lovely hours, I was transported to Jane Austen's world and I completely forgot about my foot. Just what I needed today. That is until the children made themselves ice cream and forgot to get some for me even though I had asked for some. Sigh.

This coed in Virginia is having a worse day than me. She bought a box of this at a convenience store, and undercover cops pulled guns on her and arrested her. 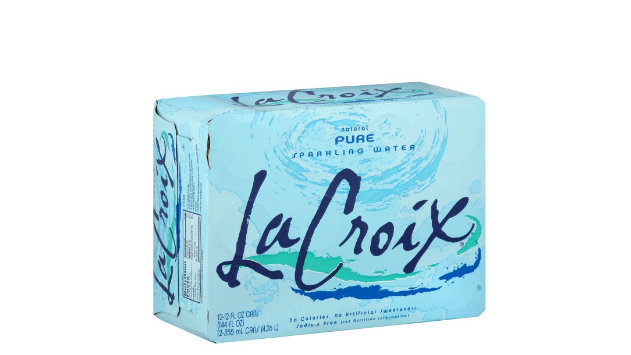 It is sparkling water, in case you can't see. The coed didn't realize they were police because they were in plain clothes and they yelled at her to roll down the windows, which she couldn't because the car wasn't on, so they pounded on the windows. It seems to me, that the whole thing could have been avoided if they had actually read the box where it says "sparkling water" which is not in any way alcohol and if they had not scared the poor girl to death. Also, who pulls a gun on a car full of college girls? Isn't that like throwing water on a grease fire because you are just asking for them to scream and panic and act irrationally. Have none of those officers ever seen a horror movie? Or met a teenage girl? So thank you, Charlottesville Police, for making me grateful that the police officers in my town wave to me when they drive by and are always friendly and never pull guns on cars full of teenage girls. Small town America has its advantages. No bears or mountain lions or zombie wheat and friendly police officers--not the makings of a horror movie at all.