They might as well have, though. Apparently, I should not be allowed to watch zombie movies while blogging because I forgot to push the button. Then, when Sister 1 texted that she was worried because there was no post, I tried to publish it from my phone, but it cut off the end because I hadn't saved it yet. But Day 338 is all fixed and you will be happy to know that we are not all dead in a ditch as Sister 1 accused us of being. OK, she was joking. That is what she tells her children when they forget to text her or tell her where they are. She knew we weren't dead in a ditch or eaten by zombies. I did even manage to get a few hours of sleep last night in spite of the slumber party, but what happened after that is all a blur because we did a LOT today. I was extremely productive.

First, we got all the non-slumberers out of bed and gave them back to their parents. Then we went to the farmer's market and bought lots and lots of vegetables and salsa and soap. Child 1 is in charge of dinner tomorrow and she wants to make ratatouille  so we have eggplant and squash and tomatoes and onions and mushrooms, because we like mushrooms in our ratatouille. Then we came home and loaded up the back of the minivan with stuff to take to the dump which is about 20 minutes away on a good day but today was almost 40 minutes away because of traffic. It was my first time at the dump, and I have to say it was pretty quick and painless. So after the dump, we went to lunch at a seafood place and ate very messy crab legs and posted half of yesterday's story.

And then we went shopping for pants and shorts for Child 1, which of course meant we found nothing for her, but Child 2 got a whole new wardrobe. But Child 1 still needed shorts, so we then went to the mall and struck gold at Old Navy where Child 3 also got a brand new wardrobe, though she does need things to wear to summer camp. Child 1 got some shorts, but what really excites me is that she also got some awesome books to read, including Catch-22 which I hope she will keep reading through the confusion in the beginning because then it gets really, really good.

Then we went our separate ways--no, not permanently. They are still minors! What kind of parent do you think I am? Well, you are right because I am exactly the kind of parent today who would ditch her children to hang out with friends. I had dinner with Artemis and Adonis and we spent a lot of time catching up and chatting and hearing about Adonis' experiences in a war zone and eating delicious food that Artemis made. AND she made me maple sugar candy and let me take home the leftovers. She is definitely the best family I could ever choose and a true blessing in my life. It was a wonderful evening of books and history and art and even though I stayed at their house far too long, I enjoyed every minute of it. The children were all still alive when I arrived home and one of them had even showered. So I took out The Dog because I could tell by her dance when she saw me that they had forgotten, and then I fixed yesterday's post, and here I am. Tired, but happy to have had a pretty good day, in spite of the fact that my husband is in Afghanistan.

Robert Kraft, the owner of the New England Patriots, is having a worse day than me. He showed it to a very famous person who is the head of a foreign country who put it in his pocket and walked away. See if you can guess who it is? 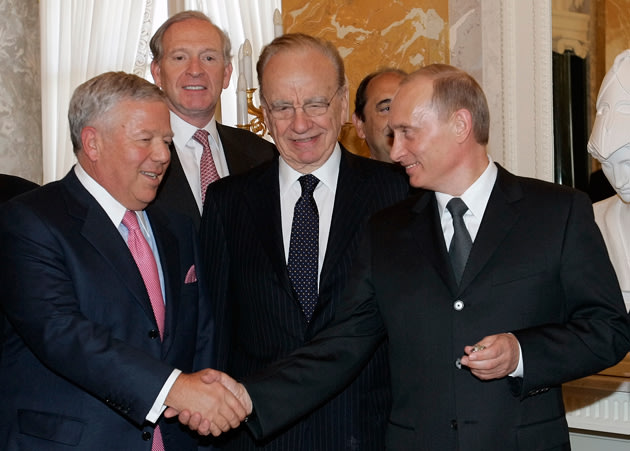 Yes, that is Vladimir Putin and there he is holding the ring right before he stole it. Mr. Kraft sent a letter asking for it back, but officials told him it would probably be better if he offered it to the president as a gift. So now Putin has a Patriot's superbowl ring. I'm not certain if that is symbolic or not. But thank you, Mr. Kraft, for reminding me never ever to show Mr. Putin my jewelry collection because some things I am not willing to share, even with my adopted sister Artemis. I will happily help her shop for her own fabulous jewels, but I'm not giving mine up ever and full intend on being buried in all of it. OK, not all of it, but the nice stuff definitely.