Child 2 has this stuffed animal which is huge and is a dog but she claims it's a panda. It is not a panda. First, it only has a black circle over one eye, and second, it's ears are not round. But that doesn't matter because for 8 years now she has been claiming it is a panda. It's a dog. The animal's name is George. Here is what George resembles.

See? Black around only one eye. This is not what George looks like. 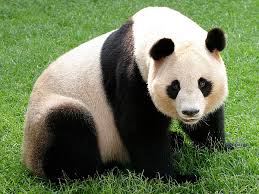 Two black eyes and round ears. I know that it really doesn't matter what George is since he is a stuffed animal after all. But I do like baiting Child 2. Plus, today,I was almost scared to death because I came out of my bedroom to see George flying straight at me. I about had a heart attack until I realized someone had put him on a music stand and it only looked like he was suspended in mid air. No idea why, but Child 2 said maybe he was listening to music from Wicked and he was inspired to try defying gravity. Very funny, Child 2. Almost as funny as when I sent Child 3 to fetch Child 2 this morning and she came down with George instead and said "George will be playing the part of Child 2 today." I am apparently raising practical joking comedians. I'm so proud!

This little girl at Sea World is having a worse day than me.

What you can't see is that is her arm there in the dolphin's mouth. Apparently, she was feeding the dolphins and held the basket of food over the water and the dolphin grabbed for it and got her arm as well. I understand she is bruised but otherwise completely fine, if a little shaken.

Last year, for Thanksgiving, we went to Florida with Husband's parents and also went to Sea World which is a great place and we had a lot of fun. I took the kids to feed the dolphins and Husband took photos. Child 3 was petrified, especially when one of the dolphins jumped up to get her fish. The picture of her terrified face is one of my favorites because it is so cute. (I know, I'm a terrible mother.) But now I understand that she was completely justified in being scared. So Child 3, I apologize for making you feed the dolphins. However, since you want to be a marine biologist when you grow up, you might have to get used to it. And thank you, dolphin girl, for showing me that my child was right. (Child 3, this may be the only time I'm ever wrong, so don't get too excited.) And Child 2, George is a dog!