The Christmas spirit is alive and well at our house because two of the children did something nice without me begging asking them to. Child 3 made me dinner because she knew I wasn't feeling well, and Child 2 last night took out both the trash and recycling cans to the curb, and today, she brought one of them in! Without being asked! Either of them! It's a Christmas miracle. Child 1 did laundry, but I'm pretty sure it's just her clothes. Still, she will walk The Dog tonight, so that is a wonderful thing.

The reason I wasn't feeling well is because I went to my office Christmas party and ate food because I paid $15 for the privilege of standing in an extremely crowded hallway filled with too many people and much too much loud music and darn it, I want to eat more than pineapple! So I had some pulled pork and potato chips and veggies and potato salad and something made me sick. It might have been the dip. I have no idea. Or the peppermints which I ate a bunch of because those and the pineapple were the only things on the entire dessert table that I could even consider. I'm telling you, I will be the only person I know who is going to lose weight this season. I so hope it's worth it. My too small Olympic T-shirt from London is still a little tight and I want to fit into it before I go to London next spring. The one from Old Navy is a little too big, so I'm glad I didn't throw it in the Boston Harbor after all. (See Bad Day 2 or 3. I can't remember which one it was.) Cute, isn't it? Those British designers do know how to suck you in before they crush your spirit.

This pig in Ohio is having a worse day than me. 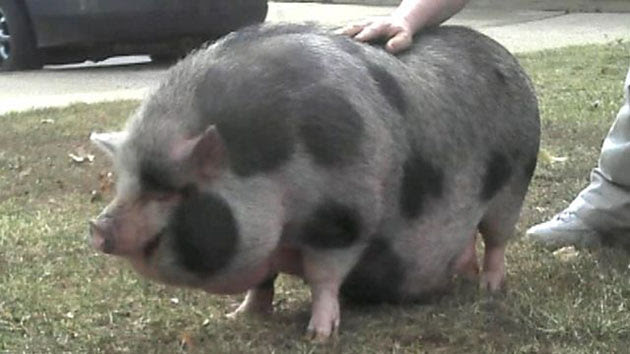 Her name is Penelope and for some reason, her owner took her for a ride in the car, and then the car was stolen. Then whoever stole it, wrecked it, most likely because there was a 300 lb. pig in the back seat. Penelope was returned to her owner unharmed, but a little freaked out. So thank you, Penelope, for reminding me to be grateful that The Dog only weighs 25 lbs and has never gone for a ride in a stolen car. Not because I love The Dog so much, but the children would never forgive me if she was stolen with the car and I would really miss the car.
Posted by Jen at 10:07 PM