I have mentioned before that our phone rang constantly during the election season which lasted about 10 years, or so it felt like. I was home sick on election day and I got 9 calls, plus 3 people came to the doo--all reminding me to vote. It was a little much. When I checked my voicemail a couple of days later, I had 15 messages all from the Republican National Committee whom I will call out as the worst offender during the election. The Democrats rarely called and only came to the door twice when I was home. The Republicans, however, would never leave me alone, and having not learned from their failure to capture our state during the presidential election, they are now at it again. I'm not kidding. They called twice tonight about the gubernatorial race which is next year. November 2013! There aren't even any candidates yet! So, dear state Republicans, I will tell you whom I will vote for--it will be for someone who doesn't call me! Seriously, how on earth would I know which way I'm voting if I have no idea who is running? Smartly, I hung up on them once and then so did Child 2 because if we had given them information that I am currently undecided, they will never leave me alone ever and I really will have to move to Australia to get rid of them. Is there any other country on the planet where campaigning is this long and this annoying?

Which brings me to my next topic which is antelope. OK, that was a horrible segue, but today is World Wildlife Conservation Day, in case you didn't know. I didn't know until I saw posters of Jeff Corwin all over the Department advertising that he was coming to speak. This is Jeff Corwin, for those of you (Child 2) who don't know who he is. 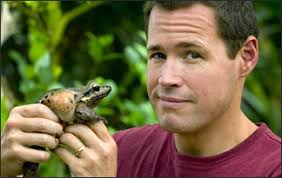 He didn't bring the frog with him, but he did talk about how he became a naturalist and how important conserving wildlife is. I thought for sure Child 2 would know his name because she watched a lot of Animal Planet when she was little, but when I told her she said who is that? I, however, was as excited as I was when I got to see Steve Irwin at the Australia Zoo years ago, except that I was also extremely frustrated. We had driven up to Beerwah from our hotel on the Gold Coast near Brisbane to go to the zoo and the children were singing that they were going to meet the Crocodile Hunter. I carefully explained to them over and over that Steve Irwin didn't live at the zoo and that he wouldn't be there and they shouldn't get their hopes up. And of course when we arrived at the zoo, they said Steve Irwin is here today! It was Harriet the Tortoise's birthday and he was there to do the crocodile show and celebrate her birthday. She was pretty old having traveled to Australia with Charles Darwin. I'm not kidding. And it was great, except it meant that I was wrong and the children sang that Mommy was wrong all the way home. For an hour. Ugh.

But anyway, since it was Wildlife Conservation Day, in solidarity I wrote our cruise line about how they were violating international law by encouraging people to buy shahtoosh shawls, which they had and made me upset because I knew it was illegal, but I didn't say anything then and I felt guilty, so today I wrote them an e-mail and I hope they stop. See, shahtoosh is made from wild Tibetan antelope and to get the fur to make the shawl, you have to kill the antelope. They are now endangered and it illegal to take shahtoosh to most European countries and is punishable by fines and jail time if you bring it to the US. So when the cruise director told us to shop for shahtoosh in Turkey, I got rather mad and now I've done something about it. So happy World Wildlife Conservation Day! I can't help thinking that Steve Irwin would be pleased.

Someone on BuzzFeed completely stole my idea, but I don't mind so much since they did my work for me. These 19 people are all having a worse day than me.  I feel the worst for the the woman falling down the hole in the convenience store, but isn't standing near someone juggling fire just asking for trouble? And of course, Lindsay Lohan is always having a worse day than me, poor thing. So thank you, BuzzFeed, for setting me up today, but seriously stop stealing my ideas.
Posted by Jen at 9:50 PM