Husband just asked me how many people would get the reference to Madame LaFarge. I assured him that 1. people who read my blog are smart, and 2. also they know how to use Google. But apparently I got her name wrong, not having read A Tale of Two Cities for twenty years, and her name is Defarge. So there you have the reference just in case you didn't know about the crazy knitting woman from the French Revolution. 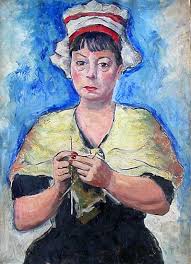 Speaking of France, the children must have enjoyed Les Miserables because I can hear "I Dreamed a Dream" playing upstairs. It's a nice change from the Phineas and Ferb theme song which has been playing incessantly because I think that is all they watch anymore since I blocked the Disney channel. I don't regret blocking Disney because now they watch a lot of TLC which I happen to enjoy unless it is that show about hoarders or the one about the crazy polygamous family which makes Child 1 yell at the TV. She does not like that family and they make her angry. Angry! Things that make Child 2 angry are harder to pin down, but today we discovered that melting snow was one of them. She wanted to go out and make a snowball when it started snowing but we made her do a chore first and by the time she was finished, it had all melted, so we heard about it and she was grumpy until she found a pile of snow at the outlet mall and threw one at Husband.

Yes, I decided to torture myself with more shopping but this time I followed my friend "Emma's" advice and I took it slow and only tried on in three stores that I usually likek. I also brought Child 1 along for advice because I find myself drawn to things that fit rather than things that are stylish. Also, I still have no idea what size I am but I'm beginning to believe that is because no two stores use the same fit models. Sometimes, even in the same store, I'm not the same size. It's like the British fashion assassins came and switched all the tags just to freak me out. But I got a few shirts and a couple of sweaters. No pants, though. I found a couple of pairs of my "skinny" pants in the back of the closet and those will have to do for now. The only problem is that for years I have been wearing mostly black and gray pants and now the only ones that fit are brown. I hope you can wear purple with brown. Otherwise I am in big trouble, shirt-wise. Navy blue also can go with brown, right? Sigh.

People visiting the Florida Everglades are having a worse day than me. Apparently, vultures in the park have decided that rubber from cars make a delicious snack and have been ripping off wiper blades and sunroof seals, both of which are rather important to have in a state where it rains a lot.

Apparently, the problem is so bad that the park first put up signs, and then started loaning everyone a tarp and bungee cords to keep the vultures off. So thank you, Florida visitors, for reminding me to be grateful that I live in a state where vultures migrate south for the winter, so my wiper blades are safe. I'll keep an eye out for those pesky thieves in the summer, though.