Bad Day 165--Not enough cooks in the kitchen

The cooking has begun. Lille Jul Aften is tomorrow. For those of you who aren't Scandinavian, "Little Christmas Eve" is December 23rd and it is when all good Norwegians play the rice pudding game, also good Danes, Swedes, and Finns. You hide an almond in rice pudding (the kind with whipped cream, not the kind with raisins) and whoever wins it gets a pig made out of marzipan. I know, you are thinking, where did you find a recipe for Norwegian rice pudding? And the answer would be from a Danish lady in Shanghai, China. But also, I have no idea what pigs have to do with Christmas since you can be certain there were no pigs at the manger. We cheat because we put way more than one almond in the pudding so that lots of people win a prize. And since Child 1 doesn't like marzipan, we also have chocolate Santas and snowmen, too. I'm very excited because this year for the first time since leaving Norway I actually found marzipan pigs. I think the children thought all this time that I was making them up. Underneath the window in the package below it says "Big Christmas Pig." 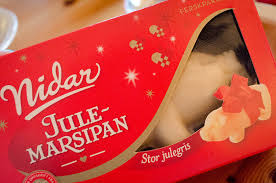 Anyway, we've been cooking all day. I'm not sure why I agreed to celebrate Lille Jul Aften again this year because last year was a disaster and none of them helped even a little bit and I vowed to never do it again. But this year, I'm sick and I can't do it all and the children and Husband have stepped up in a big way. Because it's a Norwegian holiday, I make lots of my favorite Norwegian foods including meatballs and sour-cream waffles. This year, I'm going to try to make the waffles gluten-free. We'll see how that goes. It might work, though because I made gluten-free pancakes this morning for the non-slumberers and they didn't even notice and nobody said why are these pancakes yellow because Child 1 was not there, and Child 2 was too busy talking to her friends to notice, and Child 3 had drowned hers in a lake of syrup so no one would have known what color they originally were. Seriously, there was so much syrup it was in danger of spilling over the side of her plate. Maybe that is where all the stolen Canadian syrup went.

This high school student in Georgia is having a worse day than me. He bought a Santa costume and candy canes to hand out and posted on his facebook page that the students at his school were in for a "big surprise" the next day. But the principal found the post disturbing and threatening and suspended him, even though the police had already been alerted and cleared the poor kid and verified the existence of the Santa costume and a lack of other weapons. Because, you know, candy canes can be deadly, I guess. Or maybe there is a school facial-hair dress code he violated. At any rate, his principal must be related to Scrooge. So thank you, Mr. Would-be-teen-Santa, for reminding me that joy is what Christmas is all about. I hope you have some anyway, in spite of your mean principal, and I hope the Ghost of Christmas Present keeps him up all night long making him visit all the students who think he's a meanie.