So tonight was Lille Jul Aften and we had friends over and played the rice pudding game and everyone really enjoyed it. The marzipan pigs were much more popular than I expected and people actually chose them over the chocolate snowmen and Santas. The rice pudding was a big success. You could tell because people said things like wow I normally don't really like rice pudding but this is delicious and they are totally right because I am not bragging when I say that my rice pudding is amazing. All the shrimp is gone and most of the waffles, although we have quite a few meatballs left because I made around 200. But that just means more for me for lunch tomorrow. This is what Norwegian waffles look like. They are made with sour cream and are extremely delicious, especially with Nutella which I can't eat because it is chocolate and I am allergic, but take my word for it. This year, we discovered that they are equally delicious made with gluten-free flour. 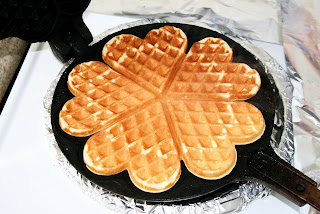 The children were extremely helpful and actually cooked AND helped clean up, but that was a little bit because Husband made them. It's nice to have a backup task master. But still, we turned up our favorite Christmas music really loud and danced to it while putting the food away. Our favorite song is "Wonderful Christmastime" by Paul McCartney and we could play it over and over again and not get tired of it. When I say "we", I mean me and the children. Husband is not as fond of the song and finds it annoying when we play it three times in a row, but we do it anyway because we're that kind of family. It has been my favorite Christmas song for years and I tried and tried to find a CD of it but wasn't able to. (This was in the days before MP3 files, so downloading it wasn't an option. Also we had dial-up internet so it would have taken like an hour to download and I would have had to listen to that awful modem sound the whole time.) Brother had heard me say that it was my favorite and found it on a CD and gave me that for Christmas the next year. I will always love him for that and I still have the CD and still play it and it is our absolute favorite because it also has John Lennon singing "So This Is Christmas" on it. Child 1 is a Christmas song purist and will only listen to the original version of things and gets angry when she hears a cover. She yells that they're ruining the song and forces us to skip it. But I have to say, about those two songs, she is right.

This woman on The Wheel of Fortune is having a worse day than me. 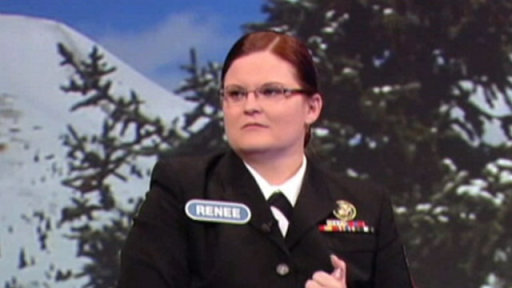 She is a Navy Specialist and was about to win over $3000 when she said "Seven Swans A Swimming" with a southern accent and it came out "Swimmin'" and they didn't give her the prize. Seriously. An accent lost her the money which really stinks because she had asked for the "g" so it's not like she didn't know "swimming" is spelled with one. I have received a lot of grief over the years because of my own Texas vernacular, so I feel for her, although I have to say it has never cost me thousands of dollars. So thank you, Renee, for reminding me that a southern accent is still charming even if the rest of the world thinks it means you can't spell. And Husband, "swimmin'" would actually be the correct pronunciation, just like you say "Thanksgiving" and "insurance." Later we will have a chat on the proper use of "y'all" and "all y'all."
Posted by Jen at 11:45 PM