Bad Day 162--All I want for Christmas

The only thing I want for Christmas is on its way. Husband made it out of Afghanistan in spite of one of his flights being canceled due to snow. He arrives tomorrow morning and I can hardly wait. I'm literally breathless with anticipation and Child 1 has vowed not to sleep until hi comes home. I'm not sure why that is a good idea because it will just make it take so much longer.

I'm sitting here looking at my huge pile of laundry and trying to muster up the energy to put it away. On the one hand, if I don't, then Husband won't have anywhere to sleep when he gets home. Then, on the other hand, I'm really really tired and I think that the seafood & crab salad at Subway has wheat in it because I feel not so great and that is the only thing I could have eaten with wheat in it. Unless marshmallows have wheat in them. And then again, if I don't clean up, then Husband will have a better idea of what life has been like the past few months, only not as lonely and awful. We'll see. Exhaustion will probably win out because I am so, so very tired and I have to get up super early to go get him. Maybe if I go to sleep, the same fairies that brought in the trash cans will fold the laundry and do the dishes. I know, but a girl can dream, can't she?

These thieves in Canada are having a worse day than me. They apparently stole millions of dollars worth of Canadian maple syrup. 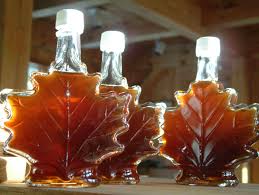 I know, you are thinking that must be a lot of syrup. Truckloads, in fact. And how on earth did they do it? Well, it doesn't matter how because after a manhunt across Canada and the U.S., they have been caught and they will go to jail for a long, long time because Canadians are pretty darn angry about the theft. So thank you, sticky thieves, for reminding me that although Canadian jails aren't as nasty as Chinese ones, I still don't want to be incarcerated in one. And also, maple syrup is not that expensive, so just buy it already.
Posted by Jen at 10:29 PM