So it wasn't my ankle this time--it's my knee. I am limping around the house on one leg because my knee is stiff and swollen and I have no idea what I did to injure it other than playing Just Dance 4. But even then I didn't move around a lot because there's not a lot of room and Child 1 was taking up all of it. I should have just done what Husband did and sit on the couch and wave my arms and then maybe my knee hurt and he got the best scores anyway. Walking to work from the metro tomorrow will be fun. Maybe I'll see if I can catch a bus because my knee really hurts. I just don't want to do crutches again. I hate crutches. I own my own pair and I still hate them and crutches in the snow are the worst. Seriously, why do I always break something in the dead of winter?

The children are all doing homework because they go back to school tomorrow and of course their homework isn't finished. Husband is recording a book for Child 3 which I know will get listened to over and over again. It was part of the swag from the Christmas party we went to and is a great idea because now when she is lonely for him, she will be able to hear his voice any time she wants. Although it's a book about Frosty the Snowman, so that will be a little odd next June, but still.

This dinosaur smuggler is having a worse day than me. 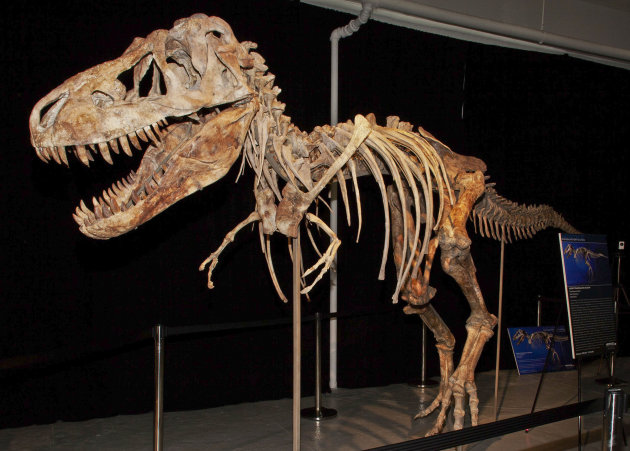 I know you are wondering how exactly does one smuggle an entire dinosaur into the US and the answer is you slap a label on it that says "Made in Britain." Because apparently it's OK to import dinosaurs from Britain but not from China. I'm not exactly sure why. Maybe we already have too many Chinese dinosaurs in America? But whatever the case, the smuggler has to give up his beloved T-Rex skeleton which will be given back to Mongolia and he might have to go to prison. So thank you, Mr. Bone Smuggler, for reminding me yet again that crime doesn't pay, and seriously, where were you going to put that T-Rex statue? You must have a really, really big living room and a super-tolerant wife. No bones on display in my house, thank you, although I'm sure The Dog would love it. What a snack that would make!