I made a delicious dinner tonight of porcupine meatballs. Don't panic. They are not made out of porcupines because that would not be delicious. They are called porcupine meatballs because they are made with rice instead of breadcrumbs. They are yummy and everyone loved them. Everyone, that is, except Child 2 who I am rapidly discovering is a lot pickier of an eater and dresser and hairstyler than I had previously thought but she is just too polite to say so. But she is also very bad at disguising her emotions so when I asked her if she liked the meatballs, she got that weird look on her face that she gets when she doesn't want to disappoint me and then she refuses to say anything. She swears now that she did like the meatballs and also now she likes spaghetti. It's just my lasagna she doesn't like. Well, that's good about the meatballs because I loved them and I'm going to make them again and she will just have to be polite about it. Also the lasagna. I need to find some gluten-free lasagna noodles before Husband comes home again. 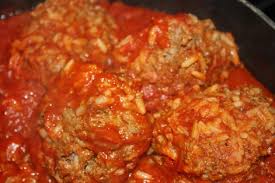 The other two children are not so polite as evidenced by Child 1 who did not like the potatoes I made to go with the meatballs because they had lemon juice in them. Sigh. They were delicious and I will also be making those again, too and I will just eat her portion. Not being able to eat all the normal things I used to eat has been a challenge, so I'm trying new recipes. Some of them will be hits. OK, most of them will be hits because I am an excellent cook, but I anticipate a few misses. That's the fun of cooking. Sometimes the experiment works beautifully like when I replaced rosemary in a recipe for butternut squash with curry. I know you think that shouldn't have worked but I knew it would and I like the recipe much better with curry because I'm not a big rosemary fan. Others, however, are a clear miss like when I made inedible fish. It turned out hard and crunchy which was so weird because I poached it and poached fish shouldn't be hard. Why would it harden? If anyone knows a kind of white fish that poaches well, please let me know because whatever that was that I bought didn't work.

But like I said, the disasters can be fun. Like the lavender cupcakes which I still thought were delicious but the children thought they tasted like soap, or the time I forgot about the eggs I was boiling and almost ruined the pan because I was playing MarioKart. The children are still talking about that disaster. Or anything we made in our crappy Chinese oven which never worked right ever. (Sorry, Genevieve. Ovens in China stink and the maintenance men just stare at you when you ask them to fix it because why would you need an oven? Because chocolate chip cookies don't work on a stove, that's why! This was obviously before I was allergic to chocolate and wheat.)

Speaking of Genevieve who is still not enjoying her move to China, everyone in Beijing is having a worse day than me. This is what it looks like in Beijing right now. 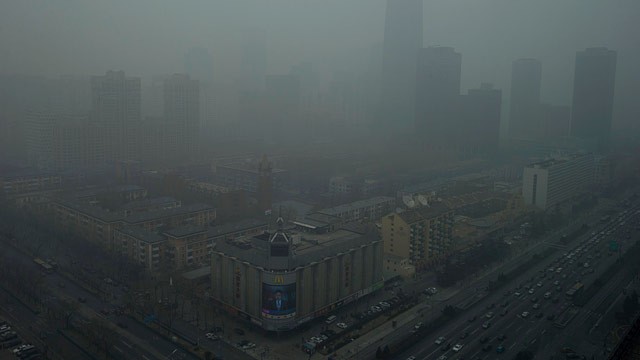 That wasn't taken at night. That's what it looks like during the day right now. Obviously all the factories they shut down right before the Olympics are back up and running because they are doing just fabulous things to the air quality. Not long after I moved to China, we had a couple of days like this and it was raining ash. I could tell because I got it all over my hair. But thank you, China, for reminding me to be grateful that I live in a country that enforces pollution regulations and that today, it was foggy, and I didn't mind because it was only water vapor which isn't going to take years off my life. I wonder how many years I shaved off by living three in China? I think Armpit, Asia was actually worse. Those 3 months I lived there at the beginning of my marriage probably shaved off a good 7-8 years in the stress alone.